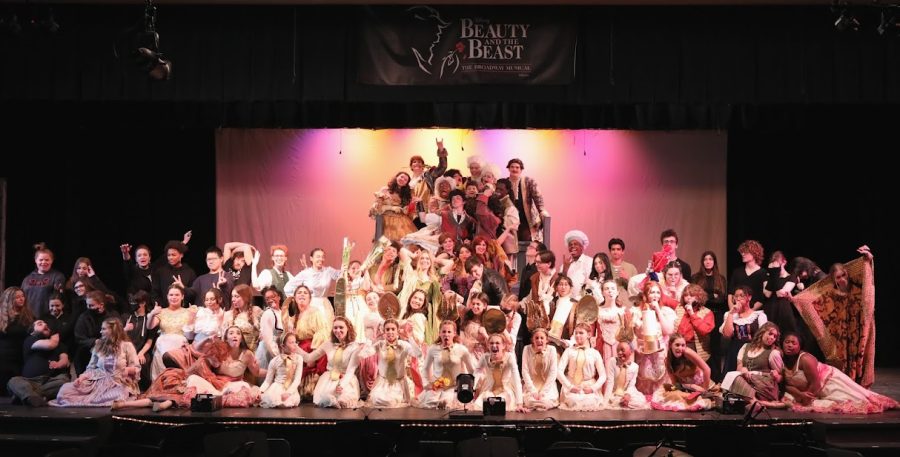 After months of preparation, Mayfield High School put on a performance of Beauty and The Beast. Over 80 people contributed to put on an amazing production. It was held over two weekends, April 1st-3rd and April 8th-10th and included a sold-out showing at the final performance.

The play had originally been set to run in 2020. A few weeks before the opening, it was shut down due to Covid-19 restrictions. All of the senior members were robbed of their opportunity to shine. After such a long wait, both the cast and crew were overjoyed to finally be able to perform. 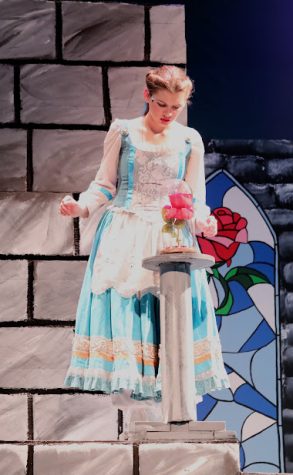 The original cast from 2020 was also invited back for the last performance. They were given reserved seating and called up on stage to give their final bow. Larry Braun, the artistic director and choreographer explained, “We felt it was important to recognize the original cast members as they spent considerable time rehearsing for a show only to have it canceled less than a month before opening.” They all deserved to be recognized for their effort.

With so many people pouring themselves into a project, the love for it is easy to see. Musical director, Brian Fancher said, “When that much passion and energy goes into something, you form a special bond with it and the others working with you.”

Jack Miller, who played Lumier, agreed with the statement, commenting, “Looking at everyone who participated in the production of our show…. you could tell that they knew they were a part of making something that was bigger than them, something truly special.”

Jayne Wilde, a seventh-grader at MMS, who participated in the Children’s Chorus, expressed the same sentiment. “My favorite thing about being in this production would have to be that all the people were very nice to us and the directors were looking out for us the whole time. There were a lot of great people I met and memories were made.” 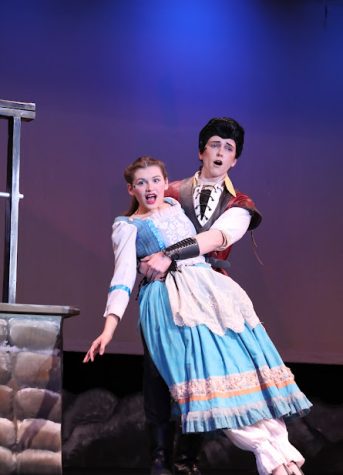 The classic tale of a small-town girl falling in love with a misunderstood prince is beloved by many. Auditions for the roles were held in early January over two nights and a third night for call-backs, with a total of 8 collective hours.

Practices began on January 16th, held on every Sunday, Tuesday, and Thursday for about 3 hours. Sunday rehearsals were usually for the full cast while weekdays were for smaller groups.

The pit crew of 14 began rehearsing in mid-February with eight, 3-hour practices. According to the musical director, Brian Fancher, six students participated in the orchestra, and the rest were hired professionals; some instruments are harder to find or too advanced for students to play. Some of the pit actually played multiple instruments. This year, for the first time, the keyboard parts, very challenging according to Fancher, were played by students: Alex Hliatzos and Faye Hliatzos.

Director Larry Braun mentioned that scheduling around 46 high school students involved in sports, jobs,  or other activities was a challenge. With such a large cast, making sure everyone is prepared can be an issue.

The cast worked hard to learn lines and choreography over the weeks they rehearsed. Anela Baker, who played the role of Belle said, “I would practice at home as much as possible and when some of us had downtime, we would work to practice lines and review choreography.”  Baker also reflected on the pressure that came with having a leading role.  “It was a lot of pressure to be as perfect as possible in that role and not feel like if you mess up you will let everyone down.” 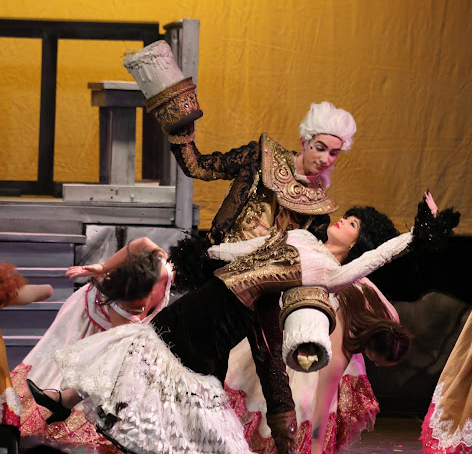 Costumes were a big part of this production. There were multiple beautiful and intricate designs. To bring the enchanted objects to life, there were some challenges. The Beast, played by senior Daniel Blum, involved wearing a head piece and furry claws, and Chip, played by Brady Bell, spent most of the play with only his head visible from inside a rolling tea cart.  Also, Lauren Barnes wore a wide-framed dress for her role as the wardrobe, Madame de la Grande Bouche. All of the costumes–rugs, silverware, napkins, and more–added visual interest to every scene.

Jack Miller reflected on the challenges Lumiere’s costume. He stated, “There were certainly a couple of challenges with acting in my costume. I mean, I had to learn how to run, jump, and dance whilst gripping onto these buckets.”  It’s a whole new experience to try and learn how to maneuver around with giant candles as arms. Miller added, “I had to make sure I was making gentle touch with who I was performing with on stage, so as to not leave candle-sized bruises on them.”  Miller’s tango scene with Elizabeth Axelrod (Babette) was a particular challenge.

Vinny Polowy, the technical director, was in charge of creating the sets. As explained by Braun, it was difficult to build some of the larger pieces. Fortunately, parent volunteers helped take up some of the workload.  The sets transformed the stage space from Belle’s vibrant village to the Beast’s dark castle, from Gaston’s lively tavern to the bookshelves of Belle’s library.

In addition to dancing, characters such as Lefou, played by TJ Grzybowski, had to fine-tune the timing of slap-stick falls and smacks from co-star Patrick McAllister who played Gaston.

The accents that went into the roles definitely made this play so much more special and gave it the perfect touch. Michael Wellendorf donned a stuffy British accent for his role as Cogsworth; and Babette, played by Elizabeth Axelrod, and Lumiere, played by Jack Miller, worked to say lines with a French accent. 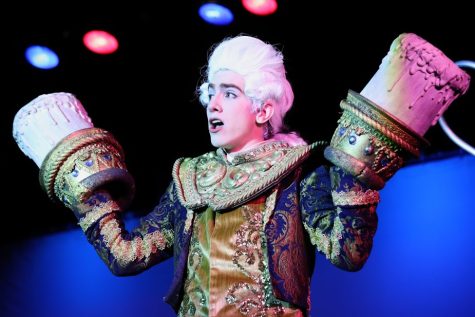 Miller mentioned, “I put a lot of thought into how Lumiere should sound, such as the pitch of his voice, how rough/smooth his voice should be, and how to pronounce certain words in the French accent.” He also added, “The very first time I met with our music director Mr. Fancher to sing ‘Be Our Guest’, he said that I sounded like Dracula and that I really needed to pay attention to the vowels I was making whilst singing.”

Miller also stated that he tried to sound like an American putting on a French accent rather than a native French speaker because the actors in the plays and movies were all very obviously American. 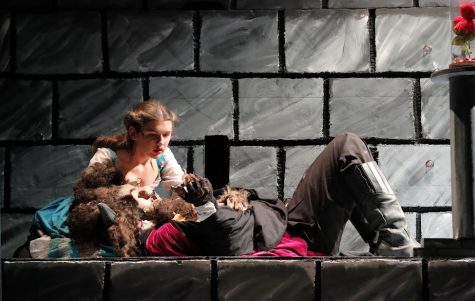 Director Larry Braun expressed how important all the plays are to him. “…directing the musicals, while managing my travel schedule for work and spending time with my family is a difficult balancing act. However, I would not change a thing because this is my passion. Musical theater and choreography are a part of my life, and I certainly love what I do.”

He added that all of the production staff have other jobs but that they help put on the productions for both the students and the community.

Beauty and The Beast is beloved by many worldwide and the Mayfield High School’s rendition surely surpassed all expectations, earning standing ovations from enthusiastic fans.

“I am most proud of the response from the community,” said Braun.  “I had many people approach me after the show to tell me that they were coming back to a future show because it was so amazing. I’ve been told ‘this can not possibly be High School Theater, these kids are professional.’

(All photos credited to Vanessa Braun) 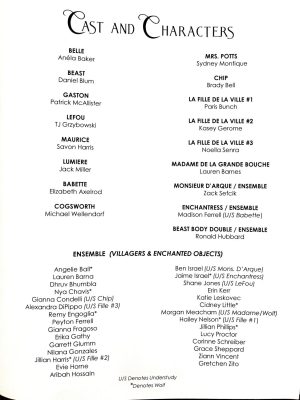 all photos by Vanessa Braun