Solar flares: are they dangerous? 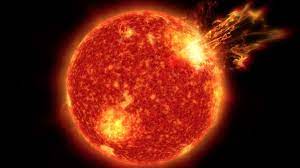 What are solar flares? What effect are they having on earth and surrounding planets? Solar flares are sudden, rapid, and intense variations in brightness. Solar flares are made of high-energy photons and particles.

Mr. Dick, the Team Hele science teacher said, “Solar flares are like the sun barfing.” An explanation for the nontraditional answer from Mr. D could be that the sun expels a lot of energy during a solar flare.

But what causes these solar flares? A solar flare occurs when magnetic energy has built up in the solar atmosphere. They also occur when intense magnetic fields on the sun get tangled and bounce back like a rubber band, releasing a lot of energy creating a solar flare.  As the fields get more and more tangled then they snap back, releasing energy and creating the flare.

Will these solar flares be affecting us, and in what ways could they already be affecting Earth?  According to NASA, “Flares and solar eruptions can impact radio communications, electric power grids, navigation signals, and pose risks to spacecraft and astronauts”.

So what exactly will happen to our technology and electricity? The flares could cause loss of power all over the world, and they can also take out communication lines and GPS.

How have solar flares affected the earth in the past? They called it a perfect solar superstorm, according to history.com. “Carrington spotted what he described as ‘two patches of intensely bright and white light’ erupting from the sunspots. Five minutes later the fireballs vanished, but within hours their impact would be felt across the globe. That night, telegraph communications around the world began to fail; there were reports of sparks showering from telegraph machines, shocking operators, and setting papers ablaze. All over the planet, colorful auroras illuminated the nighttime skies, glowing so brightly that birds began to chirp and laborers started their daily chores, believing the sun had begun rising.” To sum it up, in 1859 a massive solar flare occurred, causing telegraphs to be set on fire.

What is being done to minimize the effects of the solar flares? According to NBC , they can install electricity-dampening devices called Faraday cages, which are like “force fields that can surround critical pieces of equipment and protect them from currents.” So basically we’re using new technology to protect technology.

Overall solar flares and an interesting topic liked by many people across the globe. Solar flares are crazy bursts of energy and spread all across the solar system. We know that the flares could take lots of technology and what’s being done to solve the problem.