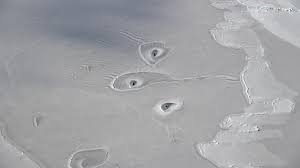 There is trouble in the Arctic. On Sunday, March 27, 2022 holes the size of giant city blocks and strange large ice hills were found on the Arctic seafloor. Climate change is the overall reason for these dramatic changes.

Climate change is term given to the slow change in a specific area’s climate. In this case, the melting of the Arctic seafloor is an effect of climate change.

While the arctic seafloor is a cold place, the change of climate there is causing significant changes.

According to NASA, “People who study Earth see that Earth’s climate is getting warmer. Earth’s temperature has gone up about one degree Fahrenheit in the last 100 years. This may not seem like much. But small changes in Earth’s temperature can have big effects.”

According to Life Science, these holes were made by melting permafrost where parts of the seafloor collapsed. In other areas, ice-filled hills which are called pingos started rising from the seafloor. The Arctic is warming faster than any region of earth.

When permafrost melts or defrosts, methane comes out and then gets to the seafloor. According to Newsweek,

“As the soil thaws, organic matter trapped within starts to break down, causing the release of methane and other greenhouse gasses. As these gasses are released, pressure builds.”

The holes were found through advanced underwater mapping technology. MBARI researchers and their collaborators, according to Science Daily, started finding dramatic changes happening to the seafloor. As of the time of publication, these researchers have found at least 41 holes–some the size of city blocks. According to CNN, the largest sinkhole recorded was 95 feet deep and 738 feet long.

The large ice hills similar to “pingos”  found on the seafloor are also a concern. Researchers found that most hills were approximately 164 feet in diameter and 33 feet high.

According to the Canadian government’s parks website, “The unfrozen ground directly beneath the lake, called ‘talik,’ is surrounded by permanently frozen ground called permafrost. After the lake drains and the water-saturated sediment at the bottom of the lake bed becomes exposed, its surface begins to freeze.” This process is what makes the pingos.

These changes on the seafloor are a problem because, the way these natural processes are done, they are a sign of climate change. Since the pingos and depressions in the Arctic seafloor are created by thawing ice, it means the Arctic is melting more, which is a big concern for both animal populations in that region and the threat of rising ocean levels.

Although permafrost is the most suspected reason for these major changes on the Arctic seafloor, some researchers suspect other climate cycles to be the cause. These hypotheses are still not completely known to be true.