Do teachers get paid enough for the work they put in? 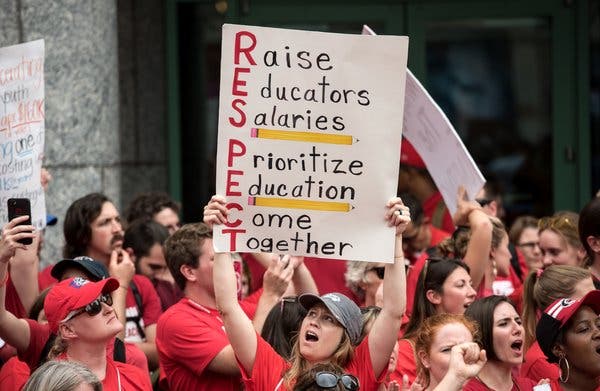 It’s no secret that many teachers feel underpaid. But there is not consensus on whether teachers should be paid more or if their salaries are fair.

In a 2019 poll, 72% of people felt teachers should receive pay raises, and that was an increase from the previous poll in 2017.

Those supporting higher teacher pay note the workload of teachers and the hours put in outside of school. David Rodes writes that the Bill and Melinda Gates Foundation found that “over 30% of teachers take work home every day. On average, teachers do another 1-2 hours of work either before they arrive in the morning or after they leave in the afternoon, leaving them with roughly a 10-11-hour work day.”  Rodes also notes a study from The U.S. Bureau of Labor Statistics, which found that “teachers are more likely to put in work over the weekend than the average American…an additional 2-3 hours of work at the end of each school week.” Rodes goes on to calculate those totals across a typical 36-week school year and adds on time for professional development or courses for license renewal.

For those who do not support higher pay for teachers, some argue that teachers only work for parts of the year and deserve to be paid less than people who work year-round. In addition to summers off, some cite holiday breaks, weekends off, and short hours as rationale for why teacher pay can remain low. Others may note that teachers often have superior health benefits or retirement programs.

Michael Robertson, author of “The Myth of the Underpaid Teacher” writes, “A calendar work year…limits teachers to 181 work days. Most Americans work 245 days per year meaning teachers get nearly 13 weeks more vacation time than the typical US worker. The days teachers do work the day starts at 8 and ends at 2:30. During that time period there are mandated breaks, non-teaching periods, and lunch… That’s only 6.5 hours per day so if teachers are voluntarily working longer that would be moving them closer to the typical 8 hour work day. With light work obligations, pay greater than the average household income, early retirement and luxurious pension payouts teaching is undeniably a well paid occupation.”

According to a 2020 report by the Economic Policy Institute, teachers earn about 20 percent less than other college-educated workers. When they study factored in health and retirement benefits, teachers still make nearly 12 percent less.

According CBS News,  67% of U.S. teachers say they “have or had a second job to make ends meet” according to a 2020 Voices from the Classroom survey. 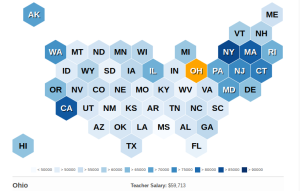 The national average for teacher pay, grades K through 12, is $64,524 according to World Population Review. Salaries vary greatly by state, though. New York teachers are the highest paid with a average income of $85,000 per year, but teachers in Mississippi and West Virginia average just $47,000 annually.

While it costs more to live in certain states than others, for many states, starting teacher for young teachers, are often lower than the state’s “liveable wage”–that is the cost for housing and essentials based on prices in that area.  For example, according to World Population Review, Montana has the lowest starting salary at $31,418, which is below the state’s livable wage of $47,000. Thirty-four U.S. states have starting teacher salaries below $40,000 a year.

Ohio teachers make an average yearly salary of $59,000, similar to the national average. Northeast Ohio  teachers get paid more than the state average, but districts still range greatly, from $45,000 to $77,000.

Also, private school teachers get paid less. According to The Washington Post, “The annual average for private schools is $27,550.”

Eighth grade teacher Mrs. Trentanelli states, “I am okay with my pay as long as I can afford to live without worry.” She says she is getting paid enough. But she does say that the work is a lot. She and a fellow coworker recently worked for days creating a website, and she estimated that in the last week, she likely spent 40 hours on out-of-school work.

Like most districts, teachers in Mayfield get paid more for the years they work or if they have additional degrees. Mrs. Fasola, eighth grade language arts teacher, thinks the difference in pay between new and veteran teachers is too great given they are doing the same work. She states,  “I don’t think new teachers should have to work their way up.” Mrs. Fasola is happy with teaching but also thinks it is a lot of work. She states that it is impossible to accomplish everything that needs to be done in the given planning periods.  She gave the example of just one class of 29 students: “It would be impossible to grade 29 essays” even in an entire week of planning.

Another eighth-grade language arts teacher, Mrs. Saunders says, “We are very lucky in Northeast Ohio and especially in Mayfield.” Compared to her first teaching job in North Carolina, she makes much more now. “I made $27,000 when I started in North Carolina,” she shared.  There was no union, we had to eat lunch with students, and we had daily duties before and after school.” She had another job in the summers and said that was very typical of her co-workers, who  either “had another gig or relied on their spouse’s salary.”

For states or districts whose salaries don’t allow teachers to live comfortably, they are seeing more teachers quitting. According to US News & World Report, “employment in local public education dropped 7.1% in September 2020, compared to a year earlier – a loss of over 570,000 workers. This is by far the largest drop in public education jobs ever recorded in the federal data, which goes back to 1955.”

Additionally, fewer college students are choosing teaching as a career. United States teacher prep programs have reported “shrinking enrollment numbers” over the past decade, and the American Association of Colleges for Teacher Education (AACTE) told CNN that the decline of new undergraduate enrollment is around 11%.

Some experts are warning of a teacher shortage, and pay is a part of many of those warnings.