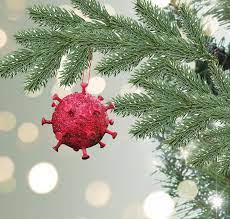 In the Christmas season, Covid made its way into the homes of many families as cases began to rise. Through the days of December 23 to December 31 cases skyrocketed as they hit their all-time high for Cuyahoga County–launching the county to the number one Covid hot spot in all of North America.

Covid cases in the Cleveland area rose by 247% in the week before and after Christmas, according to Fox8.com.

As of January 12th the seven-day average for positive cases was 19,164, one of the highest ever in Ohio. Cuyahoga County was at that time leading the state with 250 thousand cases and almost 3,000 deaths as of January 12th.

Dr. Abhiji Duggal, the vice-chair department of critical care at the Cleveland Clinic says, “Most of our hospitals, their ICU’s are running at 100% capacity.” As people begin to get infected, hospitals and ICU’s begin to reach their limit. To add on, Dr. Mike Canady from The Ohio Department of Health, says that “The overwhelming majority of those in hospitals are unvaccinated.” 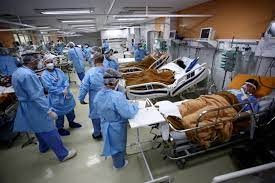 The hospitals were overcrowded and feeling the pressure. Dayton Daily News said, “The 6,457 Covid hospitalizations reported Wednesday in Ohio’s hospitals set the seventh consecutive record as coronavirus hospitalizations have increased daily since Christmas, according to the Ohio Department of Health.”

With the surge in cases, there was also a testing shortage in the area. People crowded into testing lines, and local pharmacies could not keep the at-home antigen tests in stock as families tried to test before gathering for the holidays. 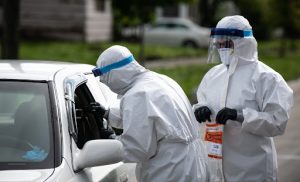 In an interview with WBUR, Gloria Caballero expressed, “It’s so hard to get a test because there are so many people who need one, whether it’s for work or for their kids. These huge lines had already gone away and now it’s like we’re at the start of 2020 again.”

The timing of the Covid surge in Northeast Ohio put a halt to many families’ holiday plans and left many celebrating at home without some of their usual traditions.

A large number of flights were cancelled around the holiday season. According to Cleveland.com, “United Airlines, the largest carrier in Cleveland, has been impacted more than other U.S. carriers in recent days, with hundreds of cancellations in the days before and after Christmas.” 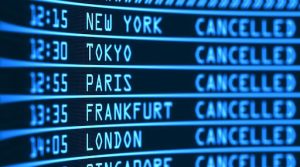 Many students and staff from Mayfield Middle School have had to cancel their holiday plans due to the virus spreading.

Mrs. Trentanelli, an 8th grade teacher, commented, “Both sides of my family got it so we had to cancel our plans.” It was difficult for everyone who had to make adjustments. She also mentioned, “My brother [hosts] Christmas day, and he hasn’t been able to have it now, this is year two, so he’s really upset.”

Mrs. McLaughlin, Assistant Principal, said that her plans of renting an igloo and ice skating were canceled after her husband contracted the virus. “My brother flew in but had to leave early considering we were sick. But all flights were cancelled and he had to leave late on Christmas Eve.”

Principal Destino said that three out of four members of his family got it. His son tested positive and Mr. Destino soon came down with symptoms. He had a, “sore throat, lost taste, lost smell.” It kept his parents from being able to visit from Buffalo, NY.

Similarly, Mrs. Saunders was unable to see her parents or grandmother due to contracting Covid, and her husband’s large family gathering was cancelled. “This was the first Christmas day in my life that I didn’t see my mom and dad,” she said. She, her husband, and her two children passed the ten-day isolation period with Christmas movies, crafts, puzzles, games, and naps.  As of mid-January, she still had many presents left to be delivered.

Jackson Farkas, student at Mayfield, also got sick over break. “I started showing symptoms three days before I found out I had Covid,” he said. Jack and his brother both had to be quarantined away from their family–not the ideal winter break.

Mrs. Satink said that her holiday plans were cancelled when two of her kids had symptoms. “I got one of my kids tested and it came back positive. We were forced to cancel holiday plans.”

Whether it was travel plans or family gatherings, the new Omicron variant, which according to Fox 8, made up 74% of the December and January cases in Cleveland, made 2021’s Christmas one to remember. Omicron is more contagious than previous variants. Whether someone is  fully vaccinated or not, they can still catch it and spread the virus to others, according to the CDC.

The surge left many presents under the tree, turkeys in the trash, and families separated for what is supposed to be the jolliest day of the year.