Man in a bear costume finishes cross-country trek for charity 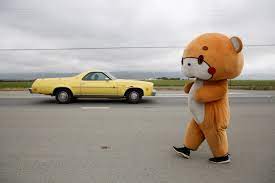 A man in a bear suit, Jesse Larios, walked across the country. He started in Los Angeles on April 12 and arrived in New York on November 14.

Larios used to run marathons and he finally decided to do a longer walk for charity. To complete the task, he walked up to 40 miles every day. This included walking through triple digit temperatures in Arizona as well as rain. 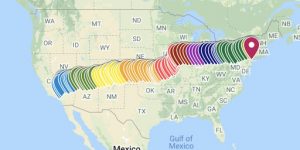 People online, including his 138,000 Instagram followers, could track the man in the walking bear suit on the tracking app. While his fans also tracked him they made sure to see where his next stop was. He took photos along the way and posed with some fans. Fans even left some goodie bags for him along the way.

Larios said he enjoyed the experience of meeting others. During an interview with the Los Angeles Times he said, “It was awesome…I got to meet a bunch of the residents here at Apple Valley.” 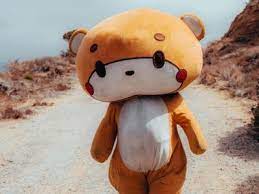 Larios created this suit with his friend, and he started running marathons in it for fun. During an interview, he said “This is what I want to do. I just want to run marathons in my bear suit,” he told CNN. “It makes other people happy too, and I’m all about laughter and smiles.”

Jesse told followers that he only packed a few things with him–his phone and some hygiene items.  He took care of his hygiene by stopping at stores or even gas stations that had bathrooms and took care of washing up in the sink. Bearsun stated that he slept in a tent wherever he felt like he needed to rest.

Larios is planning another run, which will start on January 1, 2022. He plans to run from Florida to Seattle, Washington.