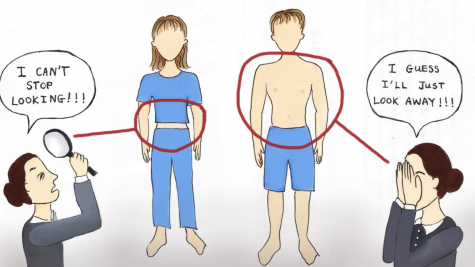 Do you believe that schools dress codes are sexist?  There have been many recent debates across the country as to whether or not dress codes unfairly target girls.  Many believe that the unbalanced attention that dress codes place on females affect teens by making them feel shame for their bodies.

The purpose of dress codes, according to the Supreme Court, is “to prevent students from wearing inappropriate clothing to school to create a safe and proper learning environment.”

According to the Mayfield Middle School handbook, available online, the dress code serves to “rule against specific items of clothing and general appearance, which is sufficiently offensive or disruptive to impair either the student’s learning or the learning of other students.”

But many people have said that many of the items identified as “offensive or disruptive” target females–specifically aspects of a female’s appearance that are beyond her control.

For example, the MMS dress code states, “Dresses, skirts, and shorts must be knee length or longer.” The specific mention of dresses and skirts definitely targets women. Also,  current fashion for men does not involve short shorts, whereas a female student would have a very hard time finding knee-length shorts at the store. 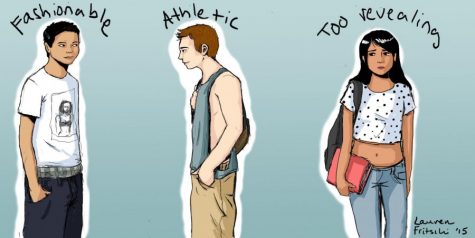 Other items mentioned by the dress code as being “inappropriate for school” are “tank tops with straps thinner than three finger widths,” “see-through or mesh tops,” “off-the-shoulder tops,” “bare midriffs,”  “skirts/dresses with high slits,” and “tight fitting and/or scooped neck or low cut tops.”  All of these target females and send the message that their bodies are “inappropriate.”

Another rule reads, “No holes, tears, rips, patches, or frays in any garments.” While this one may not seem to target girls specifically, the message is similar–that skin is bad.

Eighth grader Brooklyn Lavender was asked whether they felt like the dress code actually protects our school. “No, I believe that it prevents people from being able to dress how they want and express themselves, females mostly.”

Counselor Mrs. Borden  said that school dress codes in general can be sexist. In response to the common reason given by school boards and districts for limiting girls’ clothing options–that it distracts or temps teenage males–Borden said that last year she heard a boy say that their gender needs to “learn about self control.”

She added, “We want girls to be respectful with themselves and comfortable with what they wear, but the point should not be to make boys comfortable.” 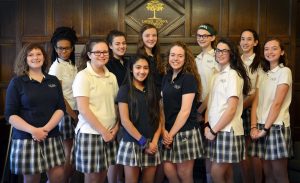 While public schools may place limitations on females’ wardrobes, private schools’ dress codes are often highly criticized for being sexist and  too old-fashioned as well.  While the term “uniform” suggests that all students dress similarly, in many private schools, male and female students dress differently. Girls are expected to wear skirts or jumpers (often regardless of the weather.)  Local schools such as Laurel and Hathaway Brown have traditional skirts as their uniforms. Many say that such dress codes reinforce outdated sexist notions of femininity.

While a majority of dress code items do target the female body, there are some items in the handbook that do seem to serve the intended purpose of maintaining a respectful school environment.  For example, on rule prohibits  “garments with inappropriate graphics, play on words, innuendos, drugs, alcohol, or gang affiliation.” Items like metal studs and chains are also prohibited, which could relate to student safety.

Rules about what students can and cannot wear to school should be limited to those that impact male and female students equally.  Dress codes should keep unsafe items, vulgar images, or disruptive messages out of schools, but they should not send the message that the female body is dangerous, shameful, or inappropriate.