Billie Eilish, Happier Than Ever overview 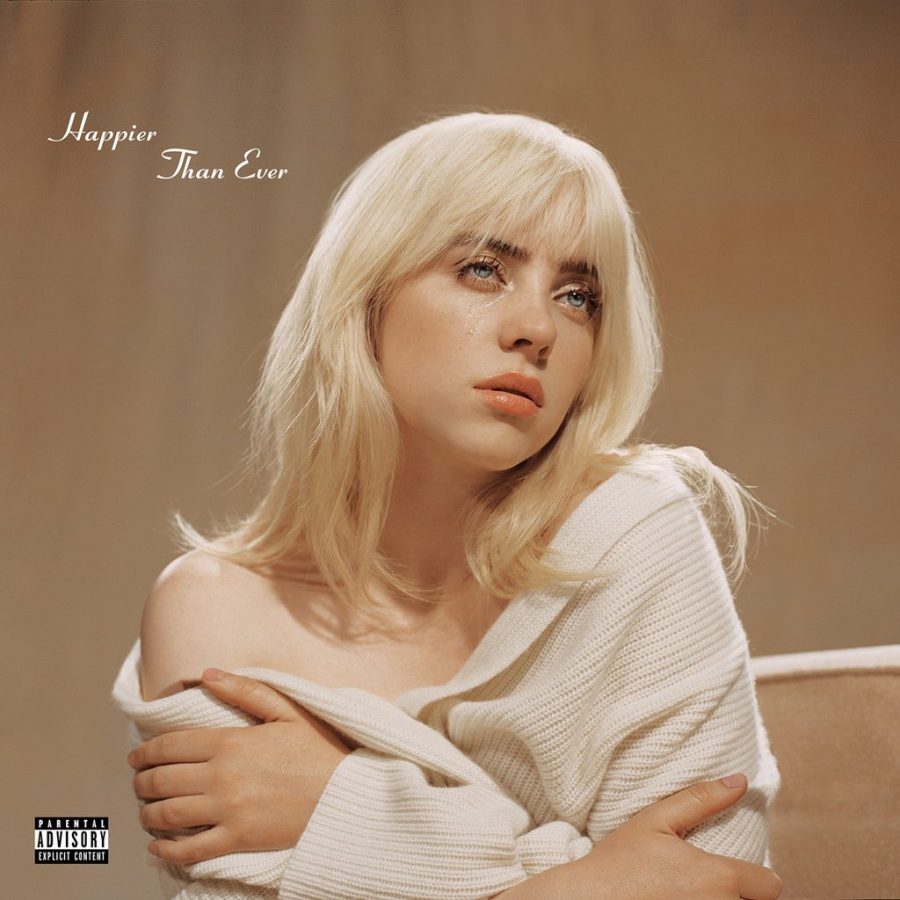 Billie Eilish released a new album, Happier Than Ever, and within a week of it July 30 debut, she had 50 million streams and had sold 23,000 copies.

Eilish is an American singer-songwriter who first became famous in 2016 because of her viral song “Ocean Eyes.”

Eilish was only thirteen years old when her dance teacher had asked her to write a song for a choreographed dance. With the help of her brother, Finneas Baird O’Connell, Eilish recorded her first original song, “Ocean Eyes,” that she then uploaded to a popular music website, SoundCloud. Eilish had only intended her dance class to listen to the song but was surprised when she woke up the next day and saw that her song had gone viral. Not so long after that, her success and career had a very fast take-off. She instantly became an internet sensation and before she knew it, she had already been signing record deals and touring all around the world. Since then she and her brother still work together on almost all of her music.

The first song on the album, “Getting Older,” taps into the pain of growing up and the profound sense of loneliness that can go with it. Billie also mentions the change in interest that comes with when you grow up. Eilish touches base on personal trauma in the song as well. “‘Cause, to be honest, I just wish the word I promised / Would depend on what I’m given’ (Not on his permission) / (Wasn’t my decision) to be abused.” Eilish mentions in an interview that she’s alright now and that she had gone through some traumatic events when she was growing up so she had mentioned it in the song. 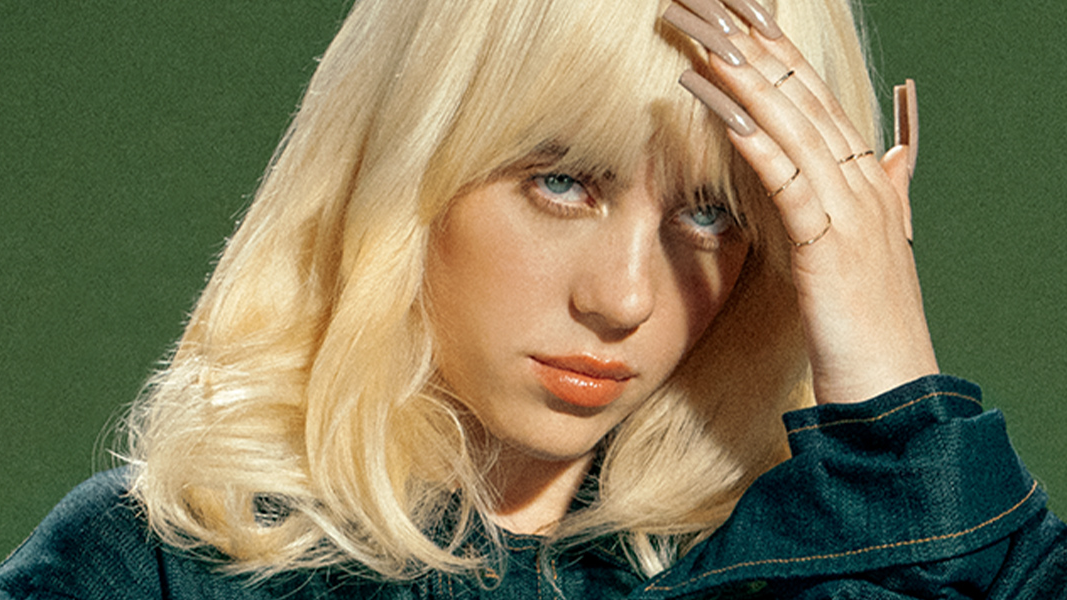 “Billie Bossa Nova” is about a secret relationship. The main point of the song is to take a look at a secret relationship while on tour for a singer. Eilish told Rolling Stone, “ We have to do a lot of goofy bulls*** when we go on tour, where we enter through freight elevators in hotels and stuff, so that paparazzi don’t follow us to our room.” Her brother Finneas explained, “And so we acted as if there was also a secret love affair going on in there of Billie being like, ‘Nobody saw me in the lobby / Nobody saw me in your arms,’ as if there was a mystery person in her life during all of that.”

The next song in the album, “My Future,”  is a very personal song to Eilish because she was in a mindset of self-reflection and self-growth. Eilish also mentions that the future feels uncertain and crazy right now. In the song, Billie sings about learning to love herself before she tries to love anyone else. She starts to sing, “Cause I, I’m in love/ With my future/ Can’t wait to meet her/ And I, I’m in love/ But not with anybody else/ Just wanna get to know myself.” Up next in the album is the song “Oxytocin.” Named after the love hormone, the song tackles the topic of desire and lust.  The lyrics suggest a secret love affair that Eilish doesn’t want public. Some of the lyrics even suggest that the attraction and affair isn’t the kind of love that most people desire. The song tries to tell the lover to run away before they get hurt by the things that Eilish wants to do to them. While that could be sensual to some, other people might see it as frightening. Either way, the result of the encounter is what is desired. The release of the hormone that is wanted: Oxytocin.

The sixth song in the album is “GOLDWING.” The lyrics of the song tell a story of a young woman who is completely innocent and pure, not having gone through any traumatic events. With the lyrics “Gold winged angel/ Go home, don’t tell/ Anyone what you are/ You’re sacred and they’re starved/ and their art is gettin’ dark/ And there you are to tear apart/ Tear apart.”  Billie told Spotify the meaning of the song. She said, “I wrote a song that is kinda a metaphor for a young woman…life that is pure…like a young, non-exploited, non-traumatized person. A metaphor for that being a gold-winged angel.”

Up next on Billie Eilish’s Happier Than Ever album is “Lost Cause.” The song is more of a female empowerment song, in which Billie sings about finally realizing that the man she is or was dating is “nothing but a lost cause.” In the bridge of the song, Eilish sings, “You’d been gone for hours/ could be anywhere/ I thought you would’ve grown eventually/ but you proved me wrong.” It’s not clear who the young artist is talking about, but it could be about Eilish’s ex-boyfriend, Brandon Adams.

“Halley’s Comet” sounds like Eilish was resisting hearing the truth when it comes to whoever or whatever she’s singing about. She’s finally upfront with both herself and the other person.  When opening up about “Halley’s Comet” Billie explained that the song is “about falling in love and the feeling of euphoria…kinda feeling like you’re floating.” While also claiming that it’s a just little romantic song, she also added, “Love is a crazy, crazy thing.”

“Not My Responsibility” explains and shows the difficulties of dealing with strangers’ unwanted comments. Billie starts with the lyrics, “Do you know me/ really know me?” She mentions that everyone in the public and the media has different responses to her decisions. Eilish told Spotify, “These are some of my favorite words that I’ve ever written and I feel like nobody listened. It’s about body image and all the things we are trained to think about bodies.” She had mentioned that people preach about body positivity but don’t live by it. She explained, “Everyone was like, ‘Yes, queen! Body positivity!’ and then like three months later there’s a pic of me in a tank top and the whole internet was like, ‘Fat!”

The tenth song on the album “Overheated” seems like she’s hitting back at the paparazzi and social media bullies who had made comments about her body. As the song continues, Billie sadly shared that the reveal of her true figure was a “let down” to people because it had shown she was like everyone else. Still, despite the hate and backlash, Eilish said that she didn’t cave and “get surgery” to conform to what society wanted her to be. She has no intention of changing herself for others, she said.

The eleventh track is based on a sadder subject than her other songs in this album. In the song “Everbody Dies” Eilish expresses her feelings surrounding death and the idea of one day losing everyone that she loves. The artist sings, “You oughta know/ that even when it’s time, you might not wanna go/ but it’s okay to cry and it alright to fold/ but you are not alone.” Eilish told Spotify the inspiration behind the song: “This song is a big bummer. It’s really about how everybody dies. You can’t change it, and it’s a horrible thought. But it’s also a comforting thought, I don’t know. It gives me comfort to know I’m gonna die.”

“Your Power,” one of the biggest hits on Eilish’s album, addresses relationship dynamics. The overall message behind the song is that people who find themselves in a position of power should not abuse it. Billie teased the meaning of the song when she had posted to Instagram announcing the album’s release.  “ This is about many different situations  that we’ve all either witnessed or experienced.”

The song “NDA” is about dating and trying to navigate through life while being famous. The song is a little peek into how life looks like when you’re a celebrity. The song was created when Eilish and her brother were just playing around with sounds and Billie had liked how the tune sounded. In the song, Eilish references the stalker that she got a five-year restraining order against. The man, according to court documents reviewed by E!, “harassed and threatened” Billie while parked at a school across from her family’s home. Eilish wrote in her declaration that whenever he saw her, “he always says something to me or makes a sign or gesture directed to me… For example, he recently made a throat-slitting gesture to me as I was backing my car into my driveway. I interpreted this as him wanting to violently harm me in some way.” She continually says in the song saying that she wishes had signed an NDA (non-disclosure agreement) when she had gotten into the relationship.

In “Therefore I am,” Eilish is calling out people who think they know her better than herself, such as the haters who body-shamed her.  Billie uses this idea in her song by singing, “I’m not your friend or anything/damn, you think that you’re the man/ I think, therefore, I am.”  She’s saying that she’s the only one who can’t put her in her place and nobody’s opinion really matters to her.

“Happier than Ever” goes more into her love life than every other song she has made. “Happier than ever” is perhaps the most direct Billie has ever been about her relationship with rapper Brandon Adams.  According to Rolingstone, there is no attempt “to veil any details in vagueness. Instead, she spews out anger and frustration.”  For example one lyric says, “I could talk about every time you showed up on time/ but I’d have an empty line cause you never did.”

The last song on the album, “Male Fantasy,” references sexual films and how docile women usually tend to falsely appear “satisfied” in them. In the song, she is viewing these videos to distract from the fact that she is having relationship issues–not getting enough attention and affection from the relationship.

Billie Eilish fans will probably like this album and that the album is quite different from all her older albums.