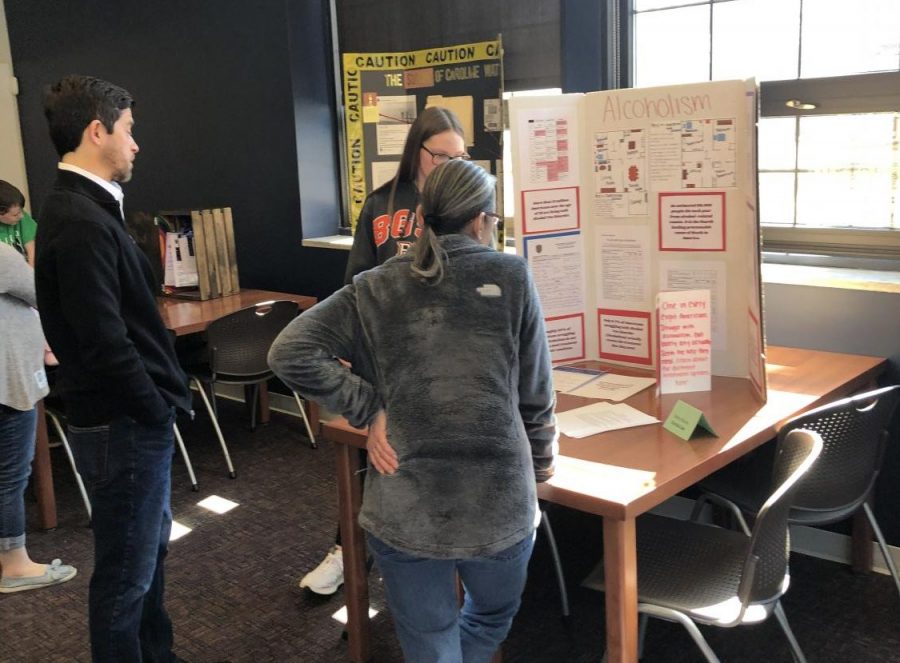 On March 13, the Hele enriched language arts class, taught by Mrs. Saunders, presented their Multi-Genre projects, which they had been working on since late January.  Twelve family members as well as three staff members attended the gallery-style sharing session, which was held in the Think Tank. 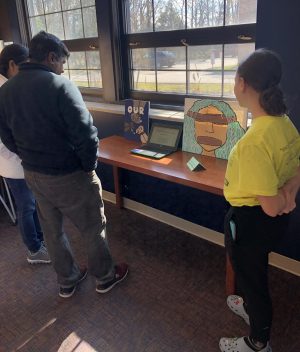 Students Ava Ospina and Sarah Levak started off the event with an opening statement. They first talked about the unit that the project stemmed from, in which they studied people who had major struggles in life. One person that the class learned about was Louis Zamperini. They read a novel titled Unbroken by Laura Hillenbrand, which was all about Louis Zamperini’s life and how he was an Olympic runner and a WWII airman who was captured by the Japanese. 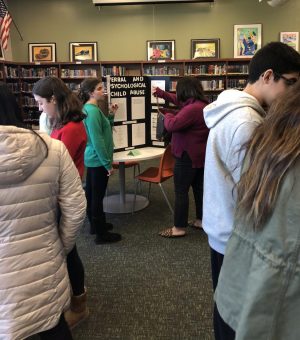 Next, Ava and Sarah talked about how the multi-genre project was an extension of that unit. They explained how the class chose struggles that affect individuals locally and globally to research.  The goal of the project was to present their projects in unique ways instead of doing the average research paper.

Each project consists of seven different genres and contains at least four different perspectives. The genres that the students chose ranged from posters and diary entries to radio broadcasts and paintings. The perspectives included victims, loved ones, therapists, doctors, and more.

The projects were assigned in January. Students were given detailed directions and a timeline to break the project into parts along the way.  They were given five class periods to work on it as well as eight weeks at home. According to Mrs. Saunders, several other assignments were eliminated from the enriched section to allocate time for this.

The Revolution and Ignite teams completed multi-genre projects as well and held sharing sessions with their classmates the week prior. 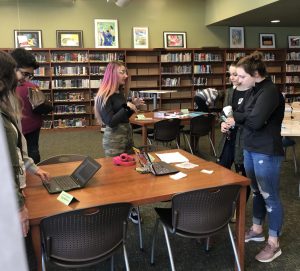 Mrs. Saunders also explained that the project is also designed to build “soft skills.” These include time management, problem-solving, and creativity.  “The research and the writing are important, too, of course,” she said, “but what I really like about this project–which is also probably what frustrates students about it–is the level of independence. It forces students to set goals, meet deadlines, follow directions, and think outside the box.”

Ziann Vincent’s topic was divorce. She explored how it affected households. Ziann presented her genres on a trifold that when closed pictured a home. When opened, the house symbolically split in half.  In her different genres, Ziann portrayed the common causes of divorce such as domestic abuse, adultery, and financial arguments and also depicted the strains on a child with a shared custody schedule. Ziann reported that she felt stressed by the amount of work and said that she put a lot of her time and effort into this project.

Felicity Engoglia’s topic was dyslexia. With her trifold and slides presentation, she tried to show how it affects people in day to day life. Felicity said that the project was really challenging and that it was hard to find all of the research and complete each genre on time. She said she put a lot of effort and time into the project at home.

Graham Wilde’s topic was International Child Labor. He created a video, a photograph, and some slides which he accompanied with a song on his trumpet.

Even though most students reported that they didn’t like how much time the project took, the staff members and parents that attended this event found the presentations to all be impressive; and most students were pleased with how their own projects turned out.

Ms. Wright was a staff member who attended this event. She replied that she loved the experience and how the projects were very informative and creative. She also liked how the students presented their projects to every staff member and parent who came to them and also answered their questions.

Principal Mr. Destino viewed the projects as well. He said, “I was really proud of the students…The projects were well thought out with pertinent information. It was very obvious that both the students and teachers put a lot of work and effort into the projects.” He added, “The main highlight for me is that kids had choice for their projects and learned a lot of new information. Great job by all!”

Assistant Principal Mrs. McLaughlin also attended.  “When I walked into Think Tank where the multi-genre projects were housed, I was in awe of the visuals that the students had created to represent their topics,” she said. “What was even more impressive was when I had the opportunity for the students to share with me their journey though research, interviews, and personal experience. Kudos to all the students and Mrs. Saunders on a job well-done.”

Mrs. Saunders said she was “incredibly proud” of the students. “The quality and creativity wowed me. The effort that went into the visual displays was really apparent. I hope they learned a lot, not only about the topics they chose but about how to manage a big task, how to create something unique, and how to have empathy for others going through a struggle.”