What’s up with the vegetarian diet? 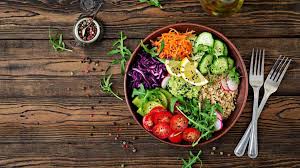 In recent years, people across the world have been opting to eliminate meat from their diets, but why has this been an increasing trend throughout the population?

The idea of being vegetarian isn’t new. Many religions cut out certain types of meat, and others are simply uneasy about eating another living creature. In other countries, meat is also highly expensive, so in order to keep costs down, they opt to not eat meat. Still more people can’t eat meat because of health issues. One of these health issues is PKU, a disorder in which a person cannot eat protein because they have decreased metabolism of the amino acid phenylalanine.

Interestingly, the BBC mentions that the number of vegans has quadrupled in the last twelve years. Veganism is the practice of eating a diet free of any animal bi-product. This includes not only meat and fish but also dairy and eggs.

One potential reason is the increased popularity of  and access to the internet; people have access to more information and media than ever before. Videos show the modern farming industry, and that makes a lot of people uneasy.

The Omnivore’s Dilemma author Micheal Pollan wrote a whole bestselling book on where our food comes from, and it illustrates how the animals are raised for slaughter along with the effect that it has on the environment.

Concern for the environment has become a bigger topic of discussion recently, and that has caused people to see how CAFOs (concentrated animal feeding operations) negatively affect the environment. In Pollan’s book, he discusses that in the modern industrial farming system, animals are fed in unnatural ways to maximize the speed of their growth.  Excessive animal waste from these feedlots produce high levels of nitrogen pollution that ends up in the water and in the air.

With the internet, people also have easier access to resources talking about the supposed health benefits of a vegetarian or semi-vegetarian diet. Like most diets, vegetarian and vegan diets have benefits when the correct amount of calories and nutrients are consumed.

According to an article on Health Harvard, the vegetarian diet is higher in fiber, which helps the digestive system, and lower in cholesterol, which can cause heart problems if it builds up.

A WebMD article also mentions that vegetarians have a 22% lower risk of heart disease.

Professionals like Marco Springman, the senior researchers of environmental sustainability and public health at the University of Oxford, have said, “We’ve found that the vegan diet could be one of the healthiest diets, outperforming pescatarian and vegetarian, because the vegan diet is higher in fruit, vegetables, and legumes and the health benefits from this compensate anything else.”

If this diet is the “healthiest out there” according to some, then why aren’t more people adopting this diet?

Some people just like meat and aren’t willing to give it up. Procon also mentions that some believe the harmful effects of modern agriculture are blown out of proportion by the media and that beef is one of the best ways to mass-produce food for people. The meat of other animals has also been such a big part of human evolution; some find it weird that people would give it up or that people value animals’ lives over plant lives when they are both living things.

Livestrong also shows that there is also the worry that when some people go vegetarian they will fall back on processed foods and become what is called a “junk food vegetarian.” Additionally, those who cut meat out of their diets need to replace it with healthy options to ensure adequate intake of iron and protein.

Vegetarians are also 20% more likely to have a stroke, said a BBC article. This may be linked to the fact that they may lack the nutrient B12, which is commonly found in meat.

If someone is looking into the vegetarian or vegan diet, proper planning is always good. If someone becomes deficient in something, there are usually vitamins people can take to combat this.

Kid’s Health even mentions that if someone is getting enough calories, a lack of protein probably isn’t a concern because it is found in other foods such as beans, nuts (and nut butters), and even nut-based milks. A lot of greens, as well as cheeses, contain protein. Even certain breads, seeds, and avocados contain protein.

Mr. Stephens, an eighth-grade teacher, went vegan for one month and vegetarian for three more after that. He decided to try this after watching the documentary Forks Over Knives and learning about the health benefits the vegetarian diet can provide. He says that he would consider going vegan again but, “it’s much harder to get meals quickly that way.” He also mentioned that he did miss eating meat at some points during the trial. Eventually, it became too much of an inconvenience for the time to continue. He said that his favorite vegetarian dish was a lemon kale sandwich that reminded him of a BLT but was vegetarian.

Morgan Meachem, an eighth-grade student, has been a vegetarian for two years by her own choice. She said, “I just feel bad for the poor little animals, and I don’t like meat anyway.” She also mentioned that she had gone vegan for a time and would like to do it again. She also reported no health problems due to this dietary choice and has no regrets switching to this diet.

Some people, like eighth-grader Fiona Duke, were raised vegetarian by their parents so they have grown up this way. She said she doesn’t miss eating meat because, besides occasionally fish, she has never had it and therefore doesn’t know if she is missing out. When asked if she would ever go vegan she responded, “no; it’s too much of a commitment.”  She also expressed no interest in switching her diet anytime soon.

Mr. Carlson, eighth-grade math teacher, has been vegan for nine years. He originally started doing this because he never really liked meat that much, but then he just kept with the diet. “I got more variety in my diet because I soon realized that I couldn’t just eat the vegetables in my freezer.” He said he didn’t meet with a doctor before starting the diet and just figured out what was working along the way. In the past six months, he said that he has been meeting with a nutritionist and working to implement more vitamin D and B into his diet. He also said that his favorite vegan dish was tabouli.

There are many debates and misconceptions about the vegetarian community. While sometimes perceived as condescending, for the most part, they are just trying to live a life they want. Some people think nothing of eating meat or accept the fact that it was a big part of evolution. Others challenge this idea for the hope of a healthier life for themselves,  animals, and the environment. Whatever the side, proper planning is always a good idea to make sure people are maintaining healthy diets.