Record for longest space mission by a woman broken 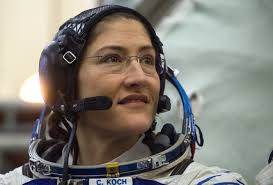 Koch would remain in space until February 6, 2020, which set a new record of 328 days. The astronaut landed near Zhezkazgan, Kazakhstan at 4:12 a.m. ET and according to Fox29, she was reported back in good health.

The original mission, Koch’s first, was scheduled to be for 6 months but was changed to help NASA learn more about the effects of space on people for long periods of time.

The previous record was held by Peggy Whinston who was one of Koch’s idols and mentors. Space.com mentions that Whinston still holds the record for most accumulative time in space by an American astronaut and most time worldwide by a woman.

Another record was also broken on his mission. On October 18, 2019, Christina Koch, along with Jessica Meir, became a part of the first all-female spacewalk. The walk lasted 7 hours while the two replaced a power controller.

CNN goes into depth on the different procedures and experiments that occurred on the mission. One of the main ones was the effect of no gravity on muscle/bone mass, and kidney health and how to prevent these negative effects of it for future space missions.

Medical discoveries were also made in the form of the microgravity crystals investigation which found that, in space, crystallized proteins can find and target cancer cells and may be a form of cancer treatment in the future.

Koch also helped to install the Biofabrication facility that can print organ-like tissue. This study has only had success in space where there is no gravity. Looking to the future, NASA plans to be able to print full human organs in future space missions.

News Observer mentions that life at the station can still resemble life on Earth. Astronauts have access to TV, and Koch even kept an active Twitter account that recorded her thoughts throughout the mission. She also used her passion for photography to document the journey by taking pictures along the way.

An article from Smithsonian Magazine tells about how for the planned future moon mission in 2024, Christina Koch is in consideration for one of the people on the mission. It also mentions her excitement and willingness to go on a Mars mission, if one was ever planned.

After breaking the record, Koch was interviewed and reiterated the fact that she hopes this record will be broken as soon as possible, because it would show advances in space exploration technology.

When in space, Koch made a lot of personal revelations as well. CNN quotes her saying, “Oh, how I miss the wind on my face, the feeling of raindrops, sand on my feet and the sound of the surf crashing on the Galveston beach,” she said. “We take daily sensory inputs for granted until they are absent.”

Koch also mentions the idea that “Earth is alive, and I have witnessed its power and beauty from a special vantage point 250 miles above the surface,” she said. “From the space station we see no borders, no boundaries — we are all part of one giant organism that breathes and adapts” (CNN).

Christina Koch has come back from space with new records, new discoveries, and a different perspective on life.