Weird Sports that you might’ve never heard of! 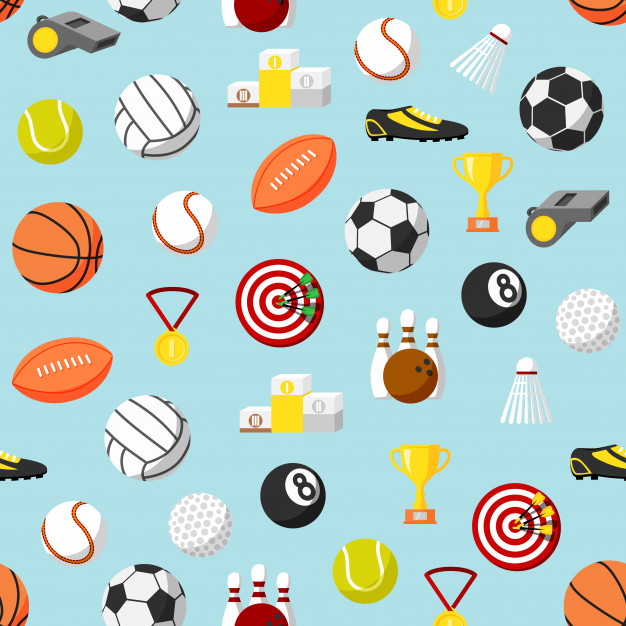 When you think of sports, you usually think of football, soccer, or basketball. But not all sports are as popular and mainstream.  These are some sports that are less known and may even seem a bit ridiculous! 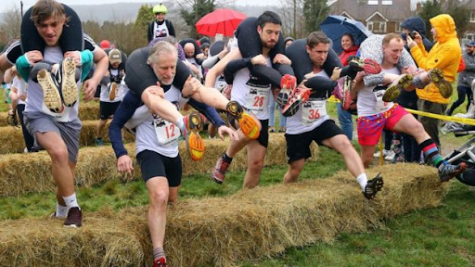 Wife Carrying is a race where male contestants carry female contestants and see who can get through all the obstacle courses the fastest. The race/competition has two dry obstacles and one wet obstacle.

The town of Frederick, South Dakota, has a website about wife carrying. It states the “wife” could be your actual wife or your neighbor’s wife, and finally, the “wife” being carried has to be at least 17 years old.

The sport originates from Finland and is generally held in different parts of Europe. According to a website called Wife Carrying, wife carrying is based around a traditional story from the 19 called Herkko Rosvo-Ronkainen, or “Ronkainen the Robber.” According to the website, this man was considered a robber in the late 1800s, lived in a forest, and ran around with his gang of thieves causing harm to the villages. They would grab random people, mostly women, and run away with them.
Extreme Ironing 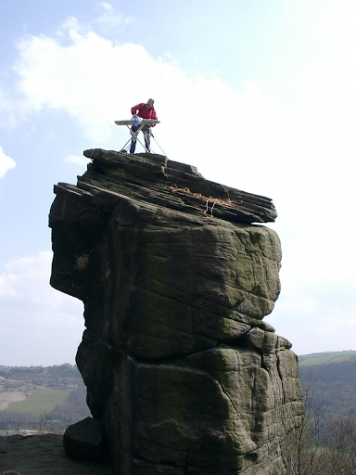 Extreme Ironing is a competition to see who can iron a piece of clothing in the most absurd places. The rules of extreme ironing are to have an ironing board that is one meter long and 30 centimeters wide. Ironing boards cannot be plastic; they have to be authentic. Traveling irons are acceptable, and finally, the article of clothing has to be at least as big as a tea towel.

Extreme ironing has been around for 22 years now, and the idea originated in Leicester, UK, from a man named Phil Shaw. He planned to combine two activities: a regular everyday one, and an extreme challenge to go with it. He ended up with Extreme Ironing. 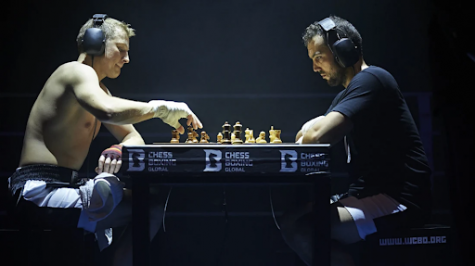 Chess Boxing is a combination of  games, which includes the board game chess, and a physical sport, boxing. A match between two people consists of 11 rounds of alternating sessions of chess and boxing. They start with 4 minutes of chess, followed by 2 minutes of boxing. Between each round, there is a 1-minute pause for the players to change equipment.

It was created/founded by Iepe Rubingh, a former artist. As reported on the official website for Chess Boxing, Iepe was inspired to make Chess Boxing from a graphic novel called Froid Èquateur, by Enki Bilal, in 1992. It took more than a decade for Chess Boxing to officially become a thing. Chess Boxing is popular in Germany, the United Kingdom, India, and Russia.
Quidditch 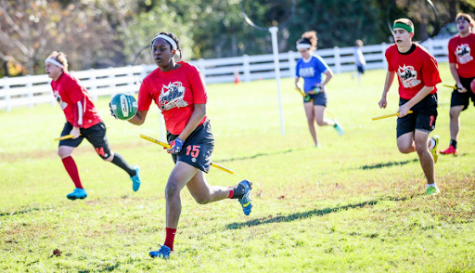 Quidditch began as a fictional sport created by the author JK Rowling in the book Harry Potter. It is a game where two teams of seven players, each with different positions/roles, face each other mounted on broomsticks. The teams consist of three Chasers, two Beaters, one Keeper, and one Seeker. The chasers throw a quaffle, which is a 12-inch rubber ball. Their goal is to get the quaffle through one of the opposing team’s hoops. The Beaters have to use small clubs that they use to beat away Bludgers, which are hard black 10-inch balls. In the novels, Bludgers are enchanted to knock players off of their brooms. Then there is the Keeper, their job is to keep the other team’s chasers from getting the quaffle through the hoop. And last but not least, the Seeker,  who is usually the smallest and fastest player on the team, “fly” all over the pitch, trying to spot and then catch the tiny Golden Snitch. A snitch is a ball which, as affirmed in the book, is the size of a large walnut. The snitch has little wings, which enable it to fly around and make it harder for the Keeper. Once it is caught, the game ends, and the team that catches it gets an extra 150 points.
Camel Wrestling 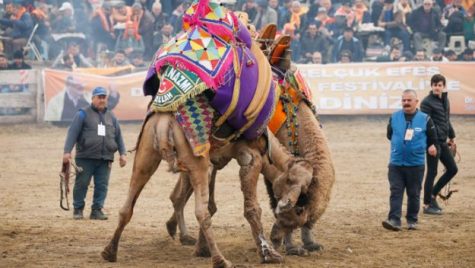 Camel Wrestling is a game that people play in Turkey.  Two male camels will wrestle for the affection for a female; they are surrounded by people that watch. The people that are watching make a bet before the camels wrestle. A camel wins by pinning the other camel’s neck against the ground. If either one of the camels run off, the other one is a winner.

About ten to twenty strong men stand near the camels just in case it gets too crazy. The sport was made 2,400 years ago, originating  from Turkish tribes. 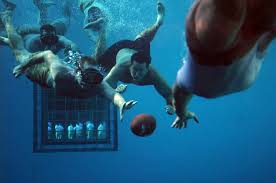 In the game of Underwater Football, there are thirteen members that play.  The objective of underwater football is to maneuver a buoyant ball to get it from one side to the other. Players score by placing the ball inside the gutter inside the pool. The equipment includes a regular rubber ball and weighted buckets that serve to  hold the goal.

Underwater Football was created at The University of Manitoba in the 1960s by Dave Murdoch. Underwater Football is a complicated sport to play because players have to stay underwater and try and put the ball in the gutter while people are “tackling.” 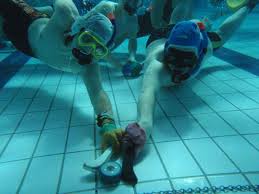 In Underwater Hockey,  six players to play the game. attempt to successfully hit the puck into the other person’s goal. The team that makes the most points wins the game. Like regular hockey, each quarter is fifteen minutes.

Underwater hockey is played in at least thirty-six countries. Some of the countries are Australia and New Zealand. Underwater hockey was created in the 1950s. It was first played in the United Kingdom by the man named Alan Blake. The stick is called the pusher. Underwater hockey can be dangerous and often involves holding one’s breath for a long time.  It also requires a great deal of upper body strength because water is hard to push.

Cheese Rolling
In Cheese-Rolling, twenty to forty people roll down a hill in pursuit of a wheel of cheese. Traditionally, the game always begins promptly at noon.  The first person to catch the cheese wins a prize.

It was started in the early 1800s, and was influenced by Ancient Roman games. Chris Anderson, who was thirty years old, broke the all time record. 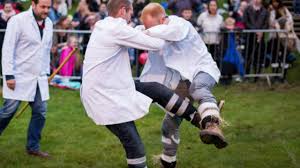 In Shin-Kicking, twelve people kick their opponents as hard as possible in their shins. Players must face each other and hold onto each others’ collars. Every time an opponent falls on the ground, a point is earned. The person with the most points at the end of three rounds wins.

Players must wear long trousers or pants and should wear padding on the shins. Without protective gear, serious injuries can occur.

Shin-Kicking was invented in the seventeenth century by the British immigrants to the United States.

So next time you want to get active, try out one of these absurd sports or invent your own! Maybe it will catch on!