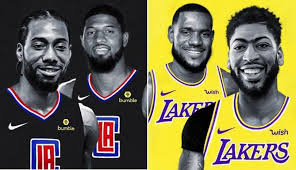 On Tuesday 22, 2019, the Los Angeles Clippers and Los Angeles Lakers faced off and the Clippers defeated the Lakers 112-102 in hard fought game.

Kawhi Leonard led the team in points with 30 points and went 10/19 field goals, 9/10 free throws. The points leader for the Lakers was Danny Green, leading the team with 28 points, 10/14 on shots, 1/1 free throws. The Clippers and Lakers total rebounds were 100 because the Lakers had 50 and the clippers had 50. Both teams mainly got points form the paint while they the Clippers shot 11-31 from 3 and the LA Lakers shot 13-33 from the 3. 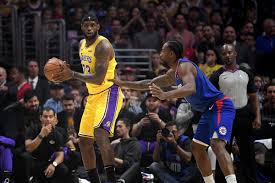 and the Lakers are currently on a 6 game win streak and 6-2 record and the Clippers are 6-3 with no current win streak.

Kawhi Leonard’s best game by far has been his game against the Charlotte Hornets with  30 points, 7 rebounds, 6 assists, 3 blocks, 2 steals, 8-8 on free throws.

Most people think that the LA Lakers are going to have a better year because they’re a healthier team than the LA Clippers. No one knew that Paul George was even thinking about getting traded so this trade to the Los Angeles Clippers was huge. But since the Clippers’ second star Paul George is coming back this Thursday to make his season debut against the New Orleans Pelicans, I think that the Clippers are a way better team than the Lakers when they’re healthy. 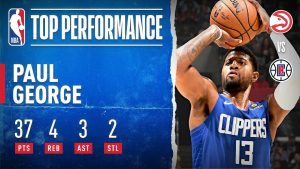 On November 14, 2019, Paul George made his Clippers debut and it ended well with him having 33 points, 4 assists, 9 rebounds, and 10-10 on free throws; but unfortunately they lost that game. After the New Orleans Pelicans game, the Los Angeles Clippers went on an 7 game win streak but they lost to the San Antonio Spurs 107-97 which snapped their win streak.

On December 1, 2019, The Los Angeles Clippers defeated the Washington Wizards 150-125. Kawhi Leonard was the leading scorer for them last night with 34 points, 14/21 on FG, 4/4 on free throws. While Paul George add 31 points to his stat sheet and they both combined for 65 to lead the Clippers to victory over the Wizards. The Clippers outscored the Wizards every quarter besides the 3rd quarter.

On December 1, 2019,  The Los Angeles Lakers were defeated by the Dallas Mavericks 100-114, which snapped their 10 game win streak, but they are still at the top of the Western Conference. Dallas’s leading scorer was Luka Doncic with 27 points, 9 rebounds, 10 assists, 3 steals, 7 turnovers.

In my opinion I think the Clippers are an equal team to  the Lakers because I feel like both duos for both teams have the ability to score and play defense very well. I think George and Kawhi are better than Lebron and Davis at playing defense and rebounding, but on the scoring side, I feel like both duos are equal because they can both score whenever.