Who makes our clothes? 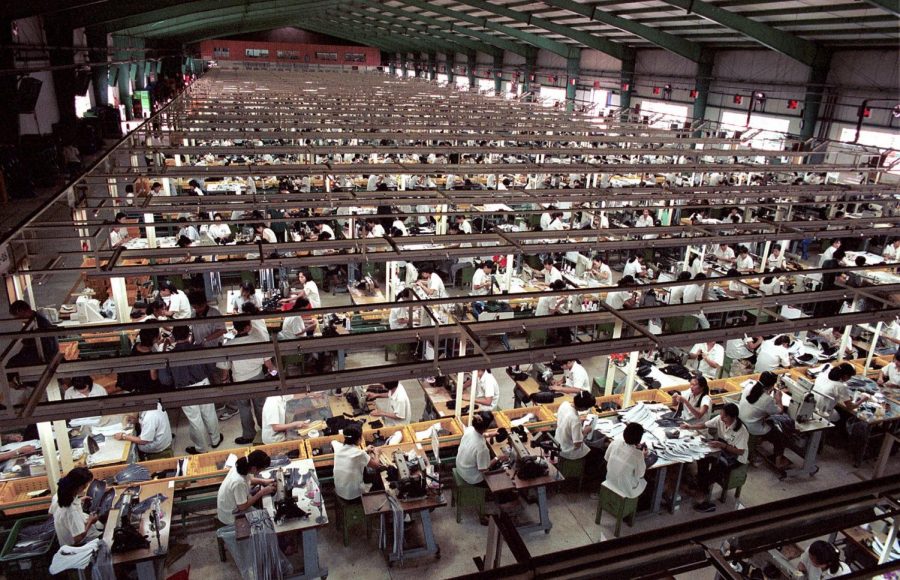 Clothes are a part of our everyday lives: we see them in marketing, we buy them, we wear them…but who makes them?

Decades ago, clothes were tailored specifically for people’s frames, and people owned fewer items.  In recent decades, though, clothing has become more accessible and cheaper.  According to Forbes, in 1930, the average person owned 9 outfits; now that number is 30.  The cost of having more clothing options at affordable prices has been that production has moved overseas.

Perhaps you’ve heard of a sweatshop.  The dictionary defines it as “a factory or workshop, especially in the clothing industry, where manual workers are employed at very low wages for long hours and under poor conditions.”  Perhaps you think that the clothes here in the United States don’t come from such places, but they often do.

Even factories here in the United States have violated labor laws. According to the Department of Labor, 50% of garment factories in America violate two or more basic labor laws, classifying them as sweatshops, says Vision Launch.
Vision Launch also reports that “11,000 sweatshops in the United States broke laws on minimum wage and overtime, while 16,000 violated health and safety conditions.” 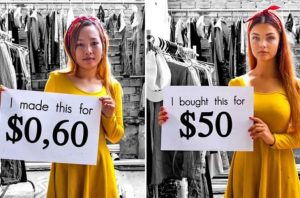 You may think that “Sweatshop Free” sticker on your shirt or the subtitle on a website means that clothes are made with fair-trade or humane work conditions, but the problem is that it isn’t illegal to lie about where clothes come from. Just because sweatshops and child labor are illegal here in the U.S., the sale of clothes made somewhere that allows these practices is not. In the places where these horrible things are legal, people are getting “dirt pay,” which means they are making pennies a day for working ridiculous hours.

Big brands such as Nike or Adidas use these places to make shoes or clothes cheaply and claim. Despite evidence of their work conditions in other countries, these companies deny it.  Both websites claim that their products are ‘sweatshop-free/fair-trade.’ Nike’s website, though, in fine print says all products are made and produced in Bangladesh/China/etc. Foreign countries don’t have laws and regulations regarding minimum wage, child labor, and safety. Nike has factories in Indonesia in which workers work 28 days straight a month to make shoes and clothes just to make less than a candy bar’s worth of money.

Mel Magazine explains that The Spice Girls were involved in a scandal with their clothing for a charity.  It stated,  “if you can’t rely on a charity that’s actively campaigning for social justice not to sell you clothes that are drenched in worker exploitation, how can you trust labels, such as ‘Fair Trade’ or ‘Sweatshop Free,’ to give you that reassurance?”

Unfair labor is a growing problem.  According to Vision Launch, “Each year, 12.3 million people are working in forced slave labor at any given time.”  Business Standards states in one of their articles that these workers are “regularly subject to physical punishment and sexual abuse.” Additionally they are often “exposed to dangerous chemicals, forced to work overtime, sometimes without pay, and often unable to earn a living wage.” 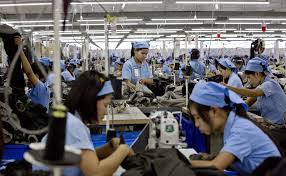 Many of the workers in the clothing industry are children.  It is estimated that there are 250 million children between the ages of 5 and 14 working in these conditions as well.  In Asia, children as young as 5 were reported to work, sometimes up to 13 hours a day. Their daily wage is less than 20 cents.

In certain parts of the world, child labor is actually quite common. In Latin America, between 10% to 25% of children under the age of 16 work in sweatshops. Statistics are comparable in India, where as much as 30 % of their population  under 16 are child laborers. In Bangladesh, approximately 1.3 million children work full time to support their families.

Not only are the lack of laws regarding long hours and children problematic, but the lack of fair pay is as well. According to Paygrade.com, in Bangladesh children and women under the age of 15 get paid 46 cents for every 16 hours.  Fashion United reported that the new wage per-month in Bangladesh  has been set at 8,000 Taka, which equals 96 U.S. dollars. 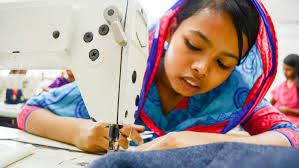 An article on medium.com featured a 15-year-old girl named Bithi who sews clothes for a living. The article states, “Squished inside a second-story room with 20 other Bangladeshi women, the girl hunches over her machine while fluorescent lights beam hard overhead.” This article shows and explains the conditions of these factories–how unsanitary and cruel these places are to workers who are trying to get by. Bithi stated that she is grateful that she had a ‘good factory,’ The article says, “She says the job has no problems, no fires, and a nice boss. When she was injured on the job, a misplaced finger leading to the needle stabbing her…she was able to take the rest of the day off to heal.”

There are workers like Bithi all over the globe–over 12 million of them. Chances are that a closer look into the brands in your drawers and closets would lead you to a factory overseas, manned by the overworked and underpaid.

The United States should ban all domestic companies from sourcing jobs to nations without fair labor laws.  But until that happens, there are things you can do to help.  Buy fewer clothes, or consider buying some items second-hand.  Research which brands, stores, and companies produce their goods in the United States or demand their workers have fair labor.  Know where your clothes are made, and refuse to contribute to the profits of those who ignore the mistreatment and servitude of their workers to make more money.