The Wildcat Voice • May 4, 2019 • https://wildcatvoice.org/5022/arts-and-entertainment/the-war-between-coke-and-pepsi-a-cultural-phenomenon/

The war between Coke and Pepsi: A cultural phenomenon 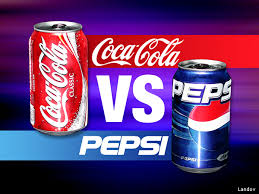 A cultural war has raged ever since the founding of Pepsi in 1898; a war of business. This war has been fought between the companies Coca-Cola and Pepsi and even among the fans of the drinks themselves.

But how has this war affected the students at MMS? I conducted research during eighth-grade lunch to see which side students at MMS took in this feud. My group of test subjects consisted of eighth graders plus a few staff members, and of this group, before tasting, 91% said that they preferred Coke over Pepsi.

On a scale from 1 to 5, most were confident that they could tell the difference between the two soda brands with the average certainty rating being 3.4.

The volunteers were given 2 samples, labeled A and B. In the taste test, A was Coke, and B was Pepsi. In this blind test,  36% preferred Pepsi(B), and 64% preferred Coke(A).

When asked to identify which was Coke, 45% subjects guessed incorrectly.  In turn, 45% of the subjects chose as the best tasting the opposite beverage than they typically prefer.

The true presence of the war of Coke and Pepsi lies within the comments from after the taste test. For the subjects who guessed incorrectly, 80% were surprised that they were wrong. Yet, they said they would continue to drink Coke rather than Pepsi even though they preferred Pepsi in the blind test. Eighth grader Ozias Covington says he was surprised, but “would not drink Pepsi.” And Kyle Kotlan agreed  that he “would probably not switch to Pepsi.”

This war has been around since Pepsi’s founding, as Coke had gotten competition from a rival brand. This war peaked in the 1990’s after the introduction of “New Coke,” in which the company tried a new recipe to mimic Pepsi’s sweetness. This failed miserably and many Americans scrambled to Pepsi for a better alternative. Then with the reintroduction of “Coca-Cola Classic,” Coke was quickly back on top–at least in terms of customer preference.

According to Eric Reed with The Street, customers generally prefer Coke. He says, “The red can of cola is one of the most popular products in the world, in some places more common than clean water.”

There are some key differences in the ingredients that would make someone prefer one over the other. According to Wide Open Eats, Coca-Cola has a bit more sodium than Pepsi, which “results in a less blatantly sweet taste.”  Pepsi is higher in calories, sugar, and caffeine than Coke.

Coke contains coca leaf extract. The Coca-Cola company imports these leaves from Peru, and Pepsi cannot get them due to a patent on the original syrup recipe from 1893.  Instead of coca leaf, Pepsi uses citric acid, which Coke does not include in its listed ingredients.  Malcolm Gladwell wrote in his book Blink that it is the zing of the citric acid that makes Pepsi often do well in a taste test in which tasters get just a sip.  But upon having to drink a full can or serving, customers said Coke satisfied them more. 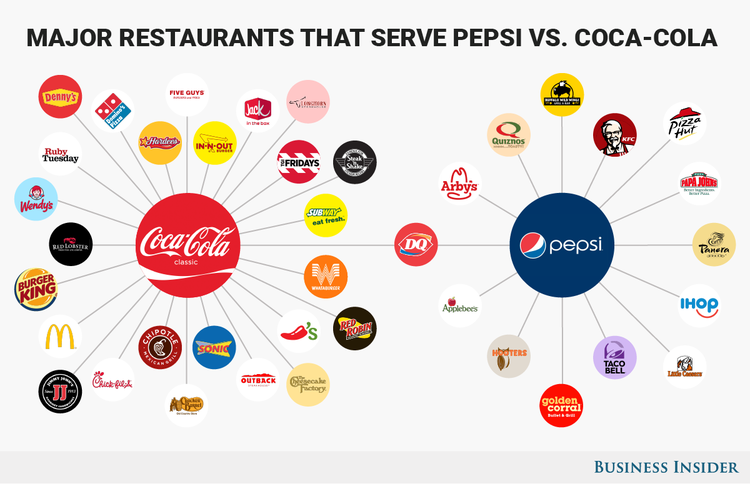 Even though customers overwhelmingly prefer the taste of Coke, and even though more restaurants serve Coke as a result, Pepsi is doing better as a business. At the close of 2018, PepsiCo’s stock sold for $117.09 in comparison to Coke’s $49.83. According to Eric Reed, “The reason is diversity.” Pepsi now owns Gatorade, Frito-Lay, and Tropicana–extending its money-making potential to snacks as well as beverages.

Despite this, for soda drinkers, Coke still manages to edge it out over Pepsi, especially in more recent years with Coke’s newer flavors like Cherry Coke, Orange Vanilla Coke, and more.  Coke remains top dog in a fairly large pond.