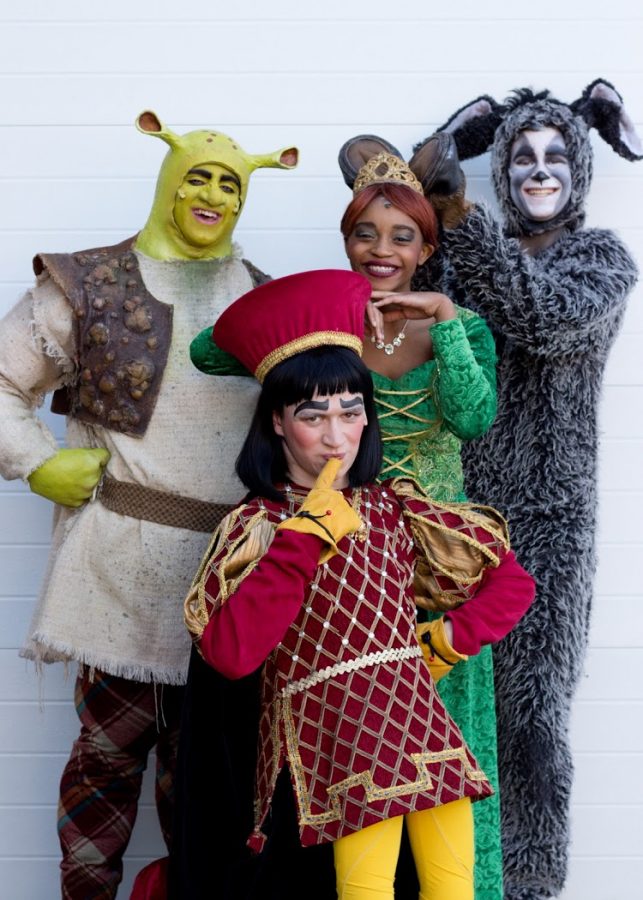 Mayfield High School performed Shrek The Musical the weekend of April 5-7 and 12-14. There were over one hundred people involved throughout this the process of putting the musical together including cast, production staff, crew, orchestra, and parent volunteers.

According to the director of MHS’s spring musicals, Larry Braun, this musical was chosen because it has a very large cast with many different roles.  He also believes it has memorable music and is loved by much of the younger audience. Braun says, “I think a lot of audience members can relate because the animated movie was so popular.”

The process started in December when auditions were held; and in January the rehearsals started.  Rehearsals included running lines, learning blocking, mastering choreography, and eventually fine-tuning for props and timing costume changes. 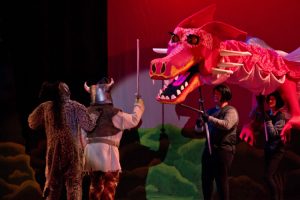 To bring the fairy tale world of Shrek alive, elaborate costumes and sets were needed.  Most of the costumes were obtained via rental from the Las Vegas National Tour of Shrek.  Technical Director Vincent Polowy constructed sets, lighting, and props. A crew of about thirty students put these design plans in action.  Assistant Director Jennifer Walker served as scenic artist and designed the giant dragon puppet.

Through the months of rehearsals, the group explained that they got much closer as a group.  Pinocchio, who was played by Sasha Borshev, said that they are all “one big family” and they “build each other up.”  Also Farquaad, played by Hayden Palmer, said, “It is a true family experience with lots of support, jokes, laughs, and most of all, singing.” 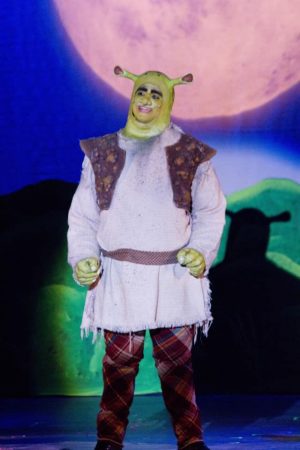 The lead of Shrek was played by senior Nathan Muhlbach, who also starred as Prince Eric in last year’s Little Mermaid musical.  Muhlbach explained, “In the musical you see a whole new side to the ogre. You get to see him change from an irritated lonely ogre to finding that he doesn’t want to be lonely anymore. He changes every scene you see him.”  Muhlbach had to learn how to speak and sing with a Scottish accent and donned both a fat suit and prosthetics to take on the role of the ogre.

Princess Fiona was played by sophomore Brianna Mosley. Her voice won her the role, as did her Dazzle Award win for Best Supporting Actress for her part as the eel Flotsam in last year’s Little Mermaid.

Sasha Borshev, Pinnochio, offered audiences an entirely different experience from last year’s dark role of Ursula and booming vocals.  She had a working nose that grew with the click of a button and masked her typical singing voice in favor of a high-pitched nasally one to suit the wooden boy.  She said of her character, “He ends up being comfortable in his own skin.”

Donkey was played by freshman Daniel Blum, who won MMS’s 2018 M-Factor.  His vocals still shone, even in a head-to-toe donkey suit. 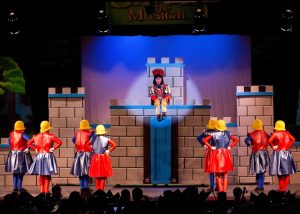 Hayden Palmer spent the entire play on his knees, sporting a pair of knee pads and tiny fake legs to play the role of the vertically-challenged Lord Farquaad.

Shrek the Musical was a large undertaking to the tune of around $35,000–about the same amount spent on last year’s spring musical.  Between fundraising, program ads, money from ticket sales, and additional earnings from concessions, the money spent is made back.

For fans of the movie, the musical does have some differences from the 2001 DreamWorks picture. Though the animated film featured a few songs, they were covers: “Hallelujah” and “I’m a Believer”most notably.  While the production did close with the entire cast performing the latter, the musical brings with it many original songs.  Some new songs are “Big Bright Beautiful World,” “Morning Person,” and “Freak Flag,” which focuses on the fairy tale creatures who are left on the swamp.

Another difference between the film and musical is that the fairy tale characters are carted away from the swamp to a dump, prompting their decision to rebel against Farquaad and storm the castle. 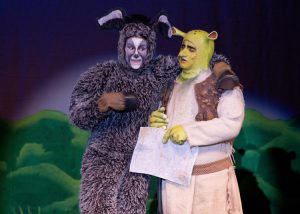 Interestingly, the MHS musical included a song between Donkey and the Dragon called “Forever” that does not appear in the original musical.

Also in the musical, audiences get to know more of the backstory of the two main characters and how they were forced away from their families.  In the musical, in ogre culture, young ogres are sent away at the age of seven; and the royal family sent Fiona away around the same time.  They find this out about each other in a song called “I Think I Got You Beat.”

From the audience’s laughter and standing ovations as well as the long lines for the character meet-and-greets after the show, it seems that the hard work of the cast and crew of Shrek the Musical paid off. 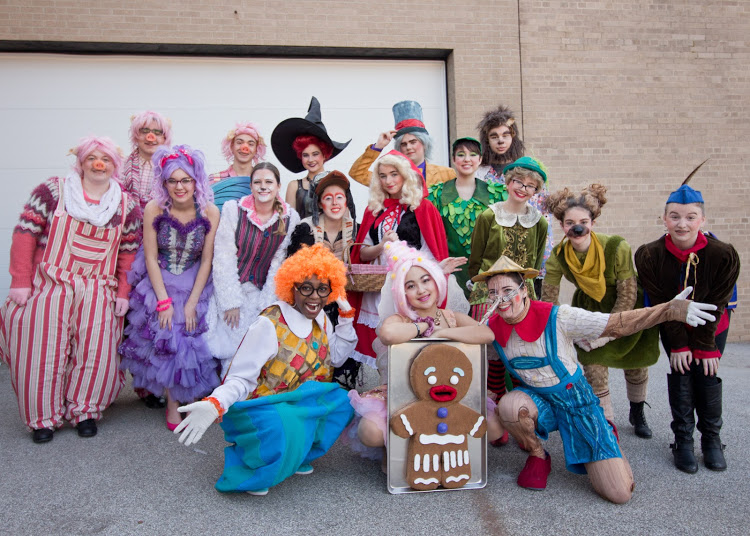 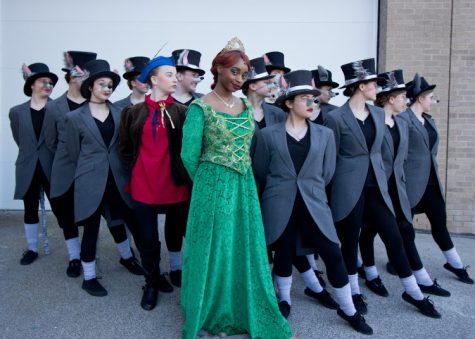 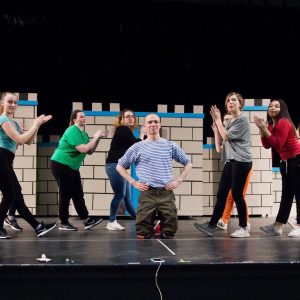 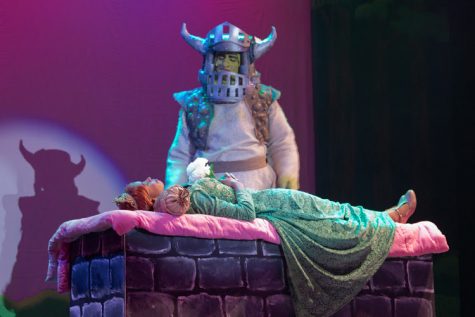 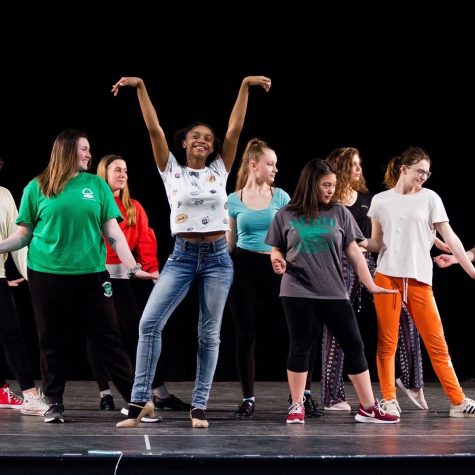