Teen vaping is on the rise; medical professionals concerned 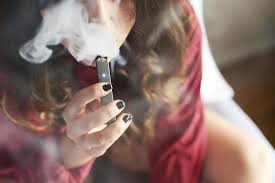 Teen vaping has become more popular in recent years, partially because people think it is healthier than cigarettes.  While vaping does cause less harm than traditional cigarettes, research shows it is not without heath impacts.

Vaping is the action or practice of inhaling and exhaling the vapor produced by an electronic cigarette or similar device. The ability to put flavors in the vape to make it taste good may be one reason it appeals to young people.

Young people may also be drawn to the idea: “hey, at least I’m not smoking.” But The National Academies of Science, Engineering and Medicine concluded there is “substantial evidence” that if a youth or young adult uses an e-cigarette, they are at increased risk of using traditional cigarettes.

Even though most adolescents say they would never smoke cigarettes due to the impacts on health, that fear does not extend to vaping. People think vaping is safer than cigarettes since vape pens or JUULs do not contain tar, carbon monoxide, or many of the chemicals found in cigarettes.  But vaping can still cause cancer as well as respiratory and heart diseases. And it still contains nicotine, which is highly-addictive and habit forming.

E-cigarettes contain diacetyl, a chemical linked to serious lung disease. According to the American Lung Association, “there’s evolving evidence about the health risks of e-cigarettes on the lungs—including irreversible lung damage and lung disease.” 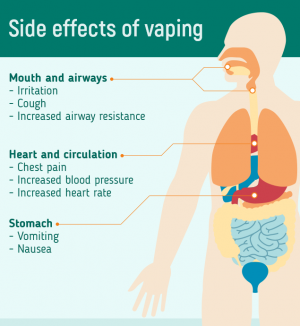 Additionally, vape liquid contains a chemical called propylene glycol (otherwise known as glycerin). By itself it can cause irritation to eyes and even airways but when it is vaporized and heated up it becomes more dangerous. Vaporized glyceric turns into these two chemicals that are considered carcinogens: ‘formaldehyde’ and ‘acetaldehyde’. A ‘carcinogen’ is a substance that can lead to cancer.

Vaping can cause a person’s body to develop what’s called “popcorn lungs.”  The smoke irritates airways and causes scar tissue to form. Over time this scar tissue gives the smallest passageways of the lungs the appearance of popcorn and can affect breathing.

Common side effects from using a vape too much or too long include irritation to eyes, stomach aches, and dry eyes. Other symptoms include light-headedness,vomiting, and lung and airway irritation. 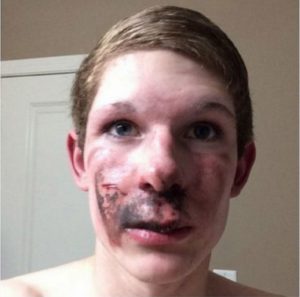 The chemicals in e-cigs aren’t the only thing that can harm users. The lithium-ion batteries have a track record for exploding and harming vape users seriously. Some children and even animals have been injured by exploding vapes. One peculiar case is when a 30 year old man got severely injured and may not be able to recover the use of his hand. The man’s vape caught fire, and he tried to retrieve it from his pocket, but the battery exploded before he fully could. After that he needed a skin graph and over 50 stitches.

Vapes can also cause the same harm to teeth and oral tissue as regular cigarettes.

And even though some people claimed to switch to vaping because it could be done safely indoors or in public, second-hand vape smoke is not without toxins.  According to the American Lung Association, a 2016 conclusion from the Surgeon General concluded that secondhand emissions contain, “nicotine; ultrafine particles; flavorings such as diacetyl, a chemical linked to serious lung disease; volatile organic compounds such as benzene, which is found in car exhaust; and heavy metals, such as nickel, tin, and lead.”

Despite all of this, E-cigarette use, or vaping, among teens has skyrocketed in recent years. According to the surgeon general, vaping among high school students increased by 900 percent from 2011 to 2015. 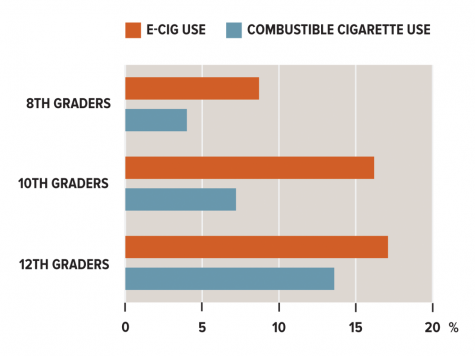 CDC statistics show that just 1.5 percent of high school teens had tried e-cigs in 2011, compared with 16 percent in 2015. The rise has occurred even as researchers are finding more evidence that nicotine can be toxic to a young person’s still-developing brain and body systems.

This graph is showing that about 8 percent of 8th-grade students vape, and 4 percent smoke regular cigarettes.  In the 10th grade those statistics increase–nearly doubling to to 15 percent and 7 percent.  This jump suggests that between 8th and 10th grades is an important time for prevention and intervention, as this seems to be the time frame when students are at risk for being exposed to and trying smoking.

In an effort to reduce vaping and smoking, some districts are enforcing harsher consequences. One school district in Georgia stated if a student gets caught with a vape or any smoking device on school property, he or she can be suspended for 10 to 12 days and put on trial for drug possession.

The scariest thing about vaping, according to the American Lung Association, is that it is so new.  No one really knows what the long-term effects will be.  The ALA even filed a lawsuit against the Food and Drug Administration for allowing candy-like flavors that appeal to kids to hit the shelves.  The ALA states, “it’s a new product and has been sold for less than a decade in the U.S. While much remains to be determined about these lasting health consequences of these products, we are very troubled by what we see so far.”