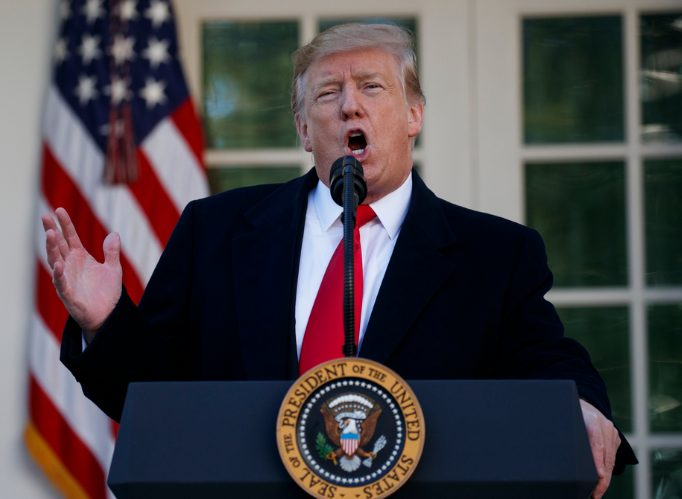 After 34 days, 21 hours and 18 minutes, the longest government shutdown in American history has finally ended as of January 25. The danger of decreasing economic growth and dropping poll numbers caused President Donald Trump to sign a bill to temporarily reopen the government without border security funding. Debates continue over border security.

Until last Friday, the government had been partially shut down due to Trump rejecting this year’s government budget proposal, as it did not include funding for border security. Trump wanted these funds to be used for a wall on the United States’ southern border, meant to keep out illegal immigrants.

With congress unable to come to a conclusion about the budget, the government could not spend any money, leaving 800,000 American government workers without pay and causing the food insecurity rates among them to increase. According to The New York Times, the average American worker had missed around $5,000 in paychecks during the shutdown.

Additionally, the economic growth rate was on track to be zero; the effects of the shutdown were starting to spread farther beyond government employees. Also, according to NPR, the majority of Americans blamed the Republican Party  for the prolonged shutdown, causing Trump’s approval rates to plummet. These factors caused Trump to give in and reopen the government, and the federal workers will be receiving back pay as soon as possible.

In an announcement on January 25, Trump stated that the government would be reopened for three weeks while he and congress attempt to reach a compromise about the role of border security in this year’s budget. Trump praised the wall in his speech, stating, “The wall should not be controversial … every career border patrol agent I have spoken to has told me that walls work…they keep drugs out and increase efficiency by allowing us to patrol much larger areas with fewer people. It’s just common sense, walls work.”

President Trump also went on to say that there is both democratic and republican support, but statements that day from House Speaker Nancy Pelosi and Senate Minority Leader Chuck Schumer contradict this. Schumer stated that the Democratic Party has been in nearly complete agreement about not supporting the wall throughout the shutdown.

Schumer appeared with Nancy Pelosi last week to announce the reopening of the government. In his statement, Schumer claimed that both Democrats and Republicans in congress agree on ending the humanitarian crisis at the border, strengthening border security, and stopping the drug crisis coming from our Southern border. Because of this, he and Pelosi both expressed confidence that congress can come to a favorable conclusion, House Speaker Pelosi stating, “I’m optimistic. I see every challenge as an opportunity to do the right thing.”

However, while both parties claim a desire strengthen border security, the disagreement comes from how. Most of the Republicans in congress agree that a wall will solve this, but most of the Democrats in congress believe that a wall is not the answer.

Trump’s steel wall is intended to keep out illegal immigrants and drugs and to increase security along the border with less manpower. Trump calls the wall “absolutely necessary to border security.” While the wall would make it harder in certain areas for illegal immigrants to get into our country, some are questioning the practicality of the wall.

According to The Washington Post, the government currently owns less an one-fourth of the land needed to build the structure, so the government would have to purchase the land on top of paying for the wall itself. Also, according to the US Customs and Border Protection, in 2018, about 87% of the drugs that entered our country came from legal ports of entry, which brings into question the effectiveness of the wall, especially in regard to the opioid crisis.

Nonetheless, Trump is an adamant advocate for a wall on our southern border; he even has gone so far as to threaten a national emergency if a conclusion is not reached by February 15.

According to The New York Times, “The president has the authority to declare a national emergency, which activates enhancements to his national powers by essentially creating exceptions to rules that normally constrain him.” Trump would use this to get funding for a wall in spite of no money being allocated to border security in the budget. However, as CNN states, the Democrats in congress will most likely challenge Trump in court.

Come February 15, if congress has not come to a conclusion about this year’s federal budget, the last month could repeat itself, straining the economy and American workers even further. However, with congress working together for the next three weeks, there is reason to believe that a conclusion could be reached.