Renovations to the gym completed; Our House Arena has its grand opening

The gym underwent substantial renovations that began during the summer and ended at the close of October–transforming the lower gym into the Our House Arena.  White House Construction oversaw the renovations, which were the second phase of the cafeteria remodel. Changes included changing the direction of the courts, moving and replacing the bleachers, and redoing the ceilings, sound, lights, and more. 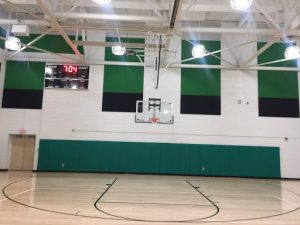 They also added some small details such as green padding on the walls, sound paneling in the ceiling, and two large projection screens that can be lowered for presentations.  The ticketing and concession stand, which used to be in the hallway, is now located in the entryway.  There is also more storage for the physical education equipment.

One thing that stayed the same was the locker rooms. Though the locker room area is dated and in disrepair, the school decided to do the areas that were going to be more visible.  According to Mr. Destino their plan was to “hit areas more visible to kids and community members.”

Physical education teachers, who had been using outdoor spaces, the upper gym, and the auditorium to hold classes, were granted access back into the space at the start of November, and daily P.E. classes now use the large arena space as well as the fitness room. 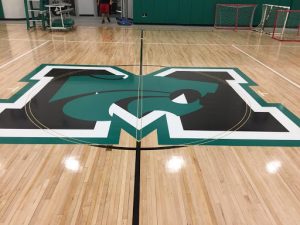 Since the completion of Our House Arena, two assemblies have been held the in the space.  The first introduced the arena with a performance by the Cleveland Cavaliers Scream Team. Their crowd-pleasing dance performance was followed up by a staff-student volleyball game.  The second assembly featured speaker, Justin Bachman, who inspired students and staff with his message of tolerance and self-acceptance.

When asked about the results Mr. Destino replied, “ I love it, it’s great. It’s a great space for P.E. and other events to take place.”