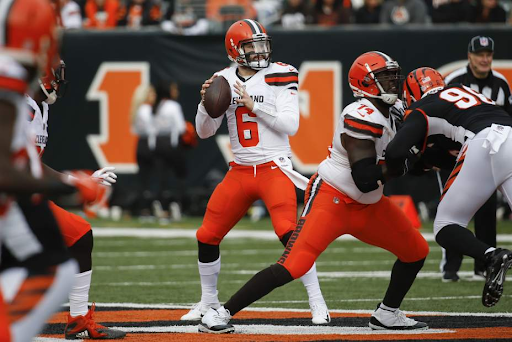 The Cleveland Browns have had an up and down season so far in 2018. Their record of 4-6-1 leaves them in last place in the AFC North division, but coming off of last year’s 0-16 heartbreaking season, this year feels, to Browns’ fans, like a winning season in it’s own right.

The postitive highlights of the season started in the first game, which ended in a tie against everyone’s favorite team to hate, the Pittsburgh Steelers. In the game the Browns were losing by 7 at halftime, and they were down by 14 at one point, but they came back, sending the game into an exciting overtime that ended in a tie. Still, it wasn’t a loss, so the season started off better than some people thought.

The ups and downs for the Browns have gone on all season long. The Browns started off the season with Hue Jackson as their head coach and Tyrod Taylor as their quarterback. Hue Jackson was fired on October 29, 2018 after only three wins in 40 games. He was replaced by defensive coordinator Gregg Williams.

Tyrod Taylor was out as the Browns quarterback after he got a concussion in the third game of the season against the New York Jets on September 24. Baker Mayfield went in for Tyrod Taylor and went on to beat the Jets after the Browns were down by 14 points in the second quarter. In that game, Mayfield completed 17 of 23 passes for 201 yards and helped the Browns get back from losing 14-0  to going to a 21-17 win. It was the first time in 635 days that the Browns had won a game.  That game was when the Baker Mayfield era began in Cleveland.

The Browns have also had their down moments this season. They lost 21 to 18 to the Saints in the second game of the season. That was a disappointing game because the kicker lost the game for the Browns. 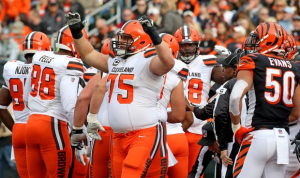 In contrast, the last two games brought wins against the Falcons and the AFC division Bengals. The game against the Bengals was full of highlights. The Browns came out in the first quarter and charged down the field to score on the first drive of the game. Baker Mayfield was 19 of 26 for 258 yards. The Browns did not let up in the first half, and they won the game 35 to 20.

Baker Mayfield has been the best highlight of the season for the Browns. Mayfield will be the Browns’ 30th starting quarterback since they came back to Cleveland in 1999. That is the most by any team in the NFL. When he was told that Mayfield said, “It’s 2018, I don’t really care.” Baker Mayfield also said after a win that he was “feeling dangerous,” and that is just what the Browns want from their rookie quarterback. And that is what they need for their future.